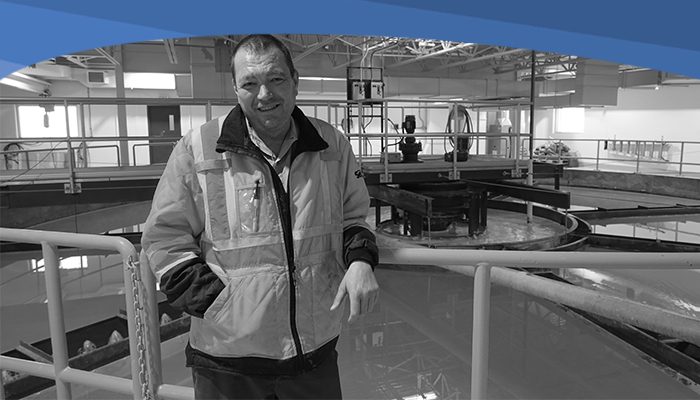 Troy Grobb joins a long and distinguished list of Selkirk water and wastewater team members to be recognized with a provincial award for his outstanding service.

Grobb was named the Manitoba Water and Wastewater Association’s 2021 George Balacko Operator of the Year award winner during a virtual annual conference.

Mayor Larry Johannson said he was thrilled when he heard that Grobb had been selected.

“The entire water and wastewater crew here in Selkirk is just fantastic and Troy in particular is dedicated and committed to his job which means he’s committed to the people of Selkirk,” Johannson said.

“This is a big award, and we’ve had quite a few of our guys win it and Troy follows in that tradition and is most deserving of the recognition.”

Employees at the water treatment plant are responsible for ensuring Selkirk has a continual and safe source of water, which the city calls for as a priority in its strategic plan.

For Grobb, who’d rather not make a big deal out of any of his own accomplishments, the award came as a surprise and he was more than OK with it occurring during a global pandemic.

“I’m a shy person so I was happy that this happened over COVID time,” Grobb laughed.

“We did it over the Internet and so there wasn’t the usual big dinner and 300 people getting together.”

Grobb says he’s comfortable where he is right now and he enjoys the challenge of facing something new everyday.

Selkirk among the best, thanks to Grobb

Dan McDermid, the city’s director of operations, said there are more than 800 operators in Manitoba, and Selkirk’s crew is always recognized as being among the best. Grobb is the eighth member of the city’s team to receive an association award since 1998.

“Troy has 24 years of service with the city and he’s a very dedicated employee,” McDermid said.

“I congratulate him on the award and his commitment to being a team player.”

Raven Sharma, Manager of Utilities, nominated Grobb for the award back in September and though she’d only been in her position four months at the time, she was already well aware of his value to the city.

“Troy is a team player and a leader who goes out of his way to help new employees. He knows his job very well and he’s an outstanding teacher,” Sharma said.

“He’s dedicated, and he brings with him a wealth of knowledge that he’s so willing to share with new employees. When there’s a water or sewer break, he shows up on the street with old maps and data from years ago that he recalls and offers a perspective most of us don’t have. He has that critical thinking and he’s always working for the better of the city and the team.”

On March 21st for World Water Day 2021, Troy led an internal tour of the Water Treatment Plant to show how he and the team treat Selkirk’s most precious resource that was voted second best tasting water in Western Canada at the Western Canada Water Conference.