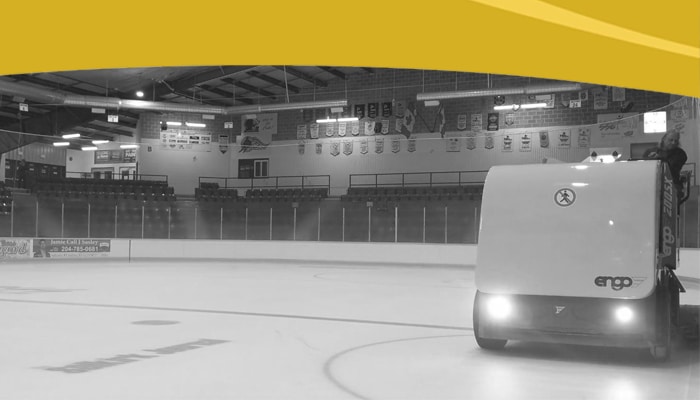 If you’ve noticed that logos on the ice surface at the Selkirk Rec Complex pop a little more these days, first of all, you’re correct and the reason for the increased visibility is simple science.

The city has invested in a Reverse Osmosis (RO) system that results in clearer and harder ice that will also be kinder to the city’s infrastructure – from the ice resurfacer to the actual ice plant – because the water is purer thanks to RO.

“The plant is running a whole lot more efficient, in part because of the new heat exchanger, but it’s also because of the RO system,” said Scott Blanco, Manager of Buildings and Fleet Maintenance.

“We’re running the plant hotter than we normally would, and in this situation running it hotter is better, it causes less energy. It doesn’t have to cool down as much to keep up to the ice.”

The RO system cost the city less than $30,000 and falls in line with the city’s asset management because it will extend the life of both the ice resurfacer machine and the actual ice plant. Water freezes at the temperature it’s supposed to freeze at – which is 0 C or 32 F – with the RO system, resulting in less need for chilling.

The RO system cleans the water used to make the ice of its impurities. Water that has minerals and impurities in it requires a lower temperature to freeze, and even if that’s just a degree or two, it causes the plant to work harder, which uses more energy and costs the city more money.

Brady Clark, Director of Culture, Recreation and Green Transportation, says the ice surface is greatly improved with the addition of RO.

“The RO system allows you to make the best ice possible,” Clark said.

“You won’t find an NHL arena without an RO system.”

Well would you look at that

Besides clearer and harder ice, the RO system uses less water to flood and has a faster freeze time. It’s also faster and easier for city staff to repair damaged ice.

Clark says prior to the RO system, the city was using water straight from its well to make ice. The hardness of the well water was starting to corrode parts on the ice resurfacer prematurely. The cost of replacing an ice resurfacer is upwards of $300,000, making the RO system a wise asset management decision.

“The RO system is going to extend the life of an expensive piece of equipment in the ice resurfacer, and it provides all the other benefits, like ice quality and ice clarity.”

Less energy and a better product

Chief Administrative Officer Duane Nicol says the RO system is a win/win – it provides a better user experience and besides fitting with the city’s capital asset management it aligns with the city’s climate change adaptation strategy as well.

“It’s reducing energy, it’s extending the life of city assets and it’s saving money and for all the groups that use the ice at the Rec Complex, they’re benefiting from a better product,” Nicol said.

“Ice that freezes at a lower temperature saves energy and dollars, and when it freezes faster it’s harder and better to skate on. When you throw in the fact that we’re reducing corrosion and extending the life of all our ice making equipment, it’s clearly the right decision. When you integrate climate change adaptation into your policies and procedures, it becomes the default setting and you become more energy efficient in every decision you make.”