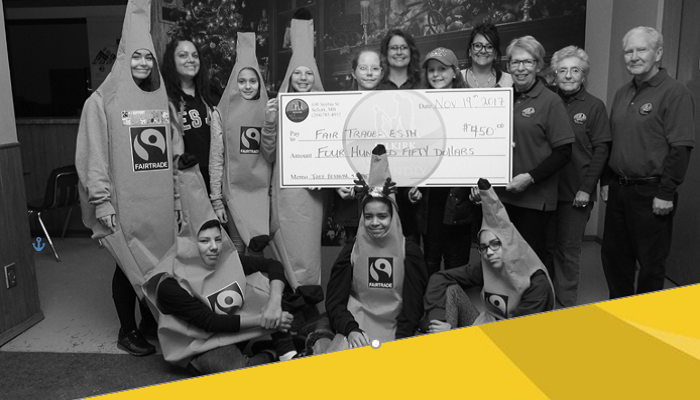 The City of Selkirk’s annual Festival of Trees and Craft Sale was a success on many levels this year – the Nov. 18 and 19th event kicked off the holiday season in fine style and raised funds for two important groups, one that supports older adults and another that champions fair trade.

Charlene Dunning, manager of transportation services for the Selkirk Transit Authority, says the volunteer committee members for Selkirk Age Friendly work at the two-day festival to ensure everything runs smoothly. The group has been the benefactor of the festival for several years and shared the funds this time out with Ecole Selkirk Junior High’s Fair Trade group, who ran the canteen over the weekend.

Partnering to Support a Great Cause

“This year, as an intergenerational initiative, the city partnered with the junior high’s Fair Trade group and Age Friendly. The students worked at the canteen and one of the ladies from Age Friendly was the coordinator, so they all got to work together,” Dunning said. “It’s a win-win for both of them, and it falls in line with the mandate for Age Friendly to work with intergenerational programs. It works out great.”

Money from registrations, craft sales and the silver collection goes to Age Friendly.

Age Friendly co-chair Pat Pruden said the festival is important to their committee, which was established in Selkirk in 2009. Age Friendly strives to make life easier for everyone, especially older adults, and to help them live independent, active and healthy lives. To make Selkirk more age friendly the group has established a list of priorities and safe and accessible transportation is among them.

“The tree festival and craft sale is a great event for the city and a fundraiser for the Age Friendly committee. We’re very proud of the things we do in the community, and one project in particular that we donate $3,000 to is Selkirk Transit to reduce fares for seniors and children,” Pruden said. “That donation helps bring the monthly fees down to $20, which helps people stay mobile and keep their independence.”

Education Towards a Fair Future

Aisha Mahmood, a teacher at ESJH who helped establish the school’s Fair Trade group three years ago, said coming on board to help with the festival is an important step towards being designated a Fairtrade School.

Fair trade is an alternative approach to conventional trade and is based on a transparent and respectful partnership between producers and consumers.

Fair trade contributes to sustainable development by offering better trading conditions to, and securing the rights of, marginalized producers and workers – particularly in the global south. They get fairer compensation for their work, thus reducing poverty, child labour, and building the prosperity and resilience of families and developing communities.

The city, along with Selkirk Biz, Selkirk Community Renewal Corporation and the Transit Authority, all share office space and participate in fair trade practices, such as the city purchasing Fairtrade coffee, tea and hot chocolate for consumption.

Community Coming Together to Create Momentum

“At the city everything we do flows from our Strategic Plan and the plan calls for us to take care of the environment in several ways, including by improving city practices. Making decisions that have a positive impact socially and environmentally, whether at home or on the other side of the world, shows that we’re thinking like a global city,” Nicol said.

“We take our role as a Fairtrade Workplace seriously and we’re working towards having Selkirk designated a Fairtrade Town and one of the criteria is community support. Ecole Selkirk Junior High is embracing the fair trade movement and the city is proud to support young people who are thinking and acting with a global conscious.”

Seventeen students volunteered at the festival on Saturday and 10 again on Sunday, making Mahmood extremely proud of her students, who gave up their weekend for a good cause. Besides working in the canteen, students dressed in banana costumes – one of the most popular fair trade products – and roamed the craft sale educating people on fair trade.

“The kids were walking around in banana suits, handing out pamphlets and stickers and badges to create awareness about fair trade,” Mahmood said.

“I was really proud of my students. They did a great job this weekend.”

Mahmood said the school needs to form a fair trade committee, either sell fair trade products or make them available at the school and promote fair trade initiatives to become designated a Fairtrade School.

They did a fair trade inventory of Selkirk, with students interviewing business owners to see how many carried Fairtrade items and made a video of the process. They also recognized the city’s fair trade accomplishments.

“We hosted a Fairtrade celebration and had the mayor and members of city council, along with school trustees and the superintendent as guests when the city got its designation,” Mahmood said.

“We still need to complete a few steps for us to get our school designation, but our goal is to have our designation at the end of the school year.”