Holiday Alley Off and Running! 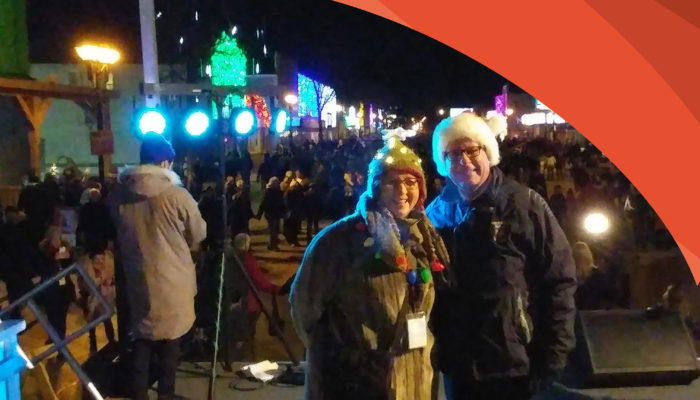 Welcome to Winter event off to a bright, spectacular start in downtown Selkirk

Let there be lights!

The first ever Holiday Alley winter celebration officially kicked off Friday night in the Steel City amid a huge crowd and an electric opening ceremony on Manitoba Avenue East. At 7:30 Friday evening, Selkirk City Mayor Larry Johannson officially opened the event with a spectacular lighting ceremony that lit up the historic city street.

“Who would have thought this could have been done,” the mayor said, “an most total transformation of our beautiful, historic downtown into this magical, whimsical holiday alley!”

The opening ceremony marks a culmination of a massive effort of community volunteers and city staff who combined to make Holiday Alley a reality. Together, the groups combined to install over 70,000 LED lights, on 3000 strings, over 24 buildings with over 100 volunteers investing thousands of hours towards creating this massive weekend event.

“I want to thank the folks who took a big idea and made it a reality – thank you to the business, the non-profit organizations, the volunteers and in particular Shirley Muir the leader of this ‘creative cabal’ for her vision and leadership,” the mayor said during the lighting ceremony. “As Shirley has said, together we make one great citizen. Well tonight, together we make one amazing community!”

Holiday Alley is a celebration of light, art, music food and creativity that will run Friday night and all day Saturday – from 10 am to 10 pm – on Manitoba Avenue East, in Selkirk. For a complete schedule, visit www.holidayalley.ca

Event highlights include a Chili cookoff, Ice Shack Auction for charity, and a blacksmith competition featuring real forges on the street. Over 100 artists and crafters displaying and  selling their work with over 20 musicians and singers appearing in addition many other events and attractions.

There is no charge to attend the event.

The Selkirk Transit Authority will be running a free shuttle service throughout the Holiday Alley weekend event. The shuttles will run every half hour to and from the Gwen Fox Gallery from the Canadian Tire and Canalta Hotel locations at Selkirk Crossing.

The City of Selkirk also advised that due the festival, portions of Manitoba Avenue East will be closed on Friday night. The entire street – from Main Street to Eveline Street – will be closed all day Saturday.

PUBLIC NOTICE: Masks to be made mandatory on all Selkirk Transit vehicles starting Tuesday, September 15
September 4, 2020

PUBLIC NOTICE: Face masks to be made mandatory for citizens entering the Civic Office
August 20, 2020
Stay in the Know!
Top Posts & Pages
Twitter
My Tweets
Go to Top