Top Bloom Rating for City at Communities in Bloom Awards 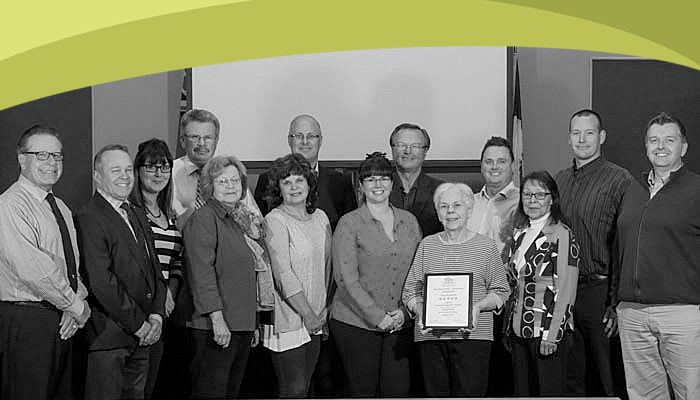 For the second consecutive year, Selkirk has been awarded the top rating of five blooms at the annual Communities in Bloom Provincial Awards and Conference, held at the International Peace Gardens Sept. 8 and 9.

Chris Carruthers, the city’s Director of Culture, Recreation and Green Transportation, said city staff as well as volunteers who make up Selkirk’s CiB committee (pictured above), have put a tremendous amount of effort into beautifying the city every year and he’s proud they were once again given the top rating.

“It’s a great group of people, who have a lot of civic pride and really care about this community, and to see them achieve this five-bloom rating again is really satisfying,” Carruthers said. “The city staff, who do the bulk of the work looking after everything from parks to green space, along with all of the volunteers who put their all into making the city look good, should be commended.”

This is Selkirk’s ninth year taking part in the provincial Communities in Bloom competition. With last year’s attainment of five blooms, the city instantly became eligible to compete at the national level, but Carruthers opted not to and said the city won’t be making the leap this year either.

The city earned 82 of a possible 100 points last year and this year upped that earning by one point to 83, and Carruthers said before they compete nationally they want to improve their score.

“We’re constantly doing more to improve and though we only went up by one point in the judges’ eyes, we made significant strides this year,” he said. “There’s no rush to go to the national competition. We’re just going to keep chipping away at things here, improving steadily year after year, setting and achieving realistic goals. Our staff and our volunteers are dedicated and we’ll head to nationals sometime down the road.”

All five-bloom communities can continue at the provincial level and climb higher with additional ratings of five-bloom bronze (scores of 84-86.9), silver (87-89.9) and gold (90 and over).

Mayor Larry Johannson said the second five-bloom rating is indicative of the pride that seems to be growing in the city. He commended city staff, the volunteers and everyone in Selkirk who take pride in their community.

“It’s such a great thing, the whole Communities in Bloom program, and I’m always so proud of our staff who take their jobs to heart and do the best they can for the city, and the volunteers who step up to make Selkirk the amazing place it is,” Johannson said. “There’s a lot of community pride out there. People of all ages want their city to look good, and they make an effort to accomplish that. Our city is clean, people are taking steps to conserve water and treat the environment better and it reflects on the city. It’s nice to see it all come together.”

Communities in Bloom judges score entrants in six categories – tidiness, environmental action, heritage conservation, urban forestry, landscape and floral displays. In their evaluation the judges noted that Selkirk is “an extraordinarily neat and tidy city,” and that the entire city – municipal, business and individuals – does an exceptional job of litter and graffiti control.

“Not a single graffiti tag was noticed in seven hours of touring around the city. Exceptional control – congratulations,” the evaluation read.

Selkirk’s five-bloom rating came with a special mention for environmental initiatives. Judges applauded the city’s focus on its council-approved strategic sustainability plan and its work towards certain objectives. Among those objectives was creating a recycling friendly community and the placement of Recycle Everywhere containers throughout city parks and facilities as well as downtown and other locations achieved that goal.

The judges mentioned numerous times throughout the evaluation that the city uses river water when watering and they lauded that as both a “great cost-saving measure and environmentally sound practice”.

In the landscaping category, judges liked the murals on city buildings such as the Dufferin Gang and the Year of the Veteran, both created by students from East Selkirk Middle School. Judges also pointed out the Mosaic Mural, which is now on display at the Gaynor Family Regional Library. The library, with its LEEDs silver status and outdoor urban prairie, also scored well with judges.