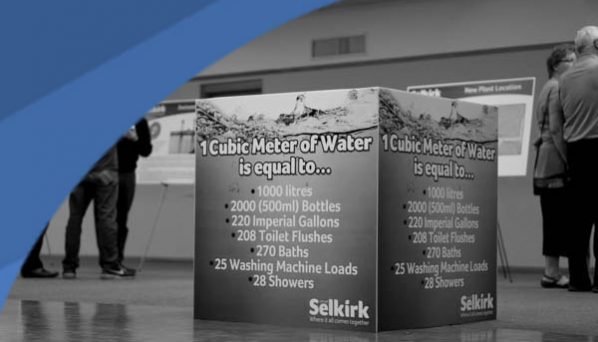 The City of Selkirk held an open house Sept. 6 to reveal details of its new Waste Water Treatment Plant in advance of a public hearing on Sept. 11 to begin the formal process of borrowing funds for the project.

The open house gave citizens a chance to view the plans for the treatment plant, through a series of storyboards, and to ask city staff and councillors questions about the $39.5 million project.

Selkirk Chief Administrative Officer Duane Nicol said about 100 people came out to the open house and there was a very positive response to the city’s plans for the waste water treatment plant.

“People were quite interested in the process, they were pleased with the environmental benefits and were surprised by how little the total project will actually cost them at the end of the day,” Nicol said. “I think people understand why we have to build this new plant, and they’re willing to pay a little bit more to have a better environmental outcome.”

Homeowners will pay approximately half a cent extra per toilet flush for their wastewater by 2021 when the cost of the project is fully incorporated into sewer rates.

Changes to provincial legislation that require treated waste water, or effluent, to contain no more than 1mg/L of phosphorus and 15 mg/L of nitrogen necessitated the replacement of the city’s current treatment plant, built in 1976. The current plant is non-compliant and has reached the end of its lifecycle. Renovating the existing plant would not be cost effective.

Mayor Larry Johannson said the treatment plant will easily be the largest capital project in the city’s history and he’s proud to say it will be a benefit to the environment and the citizens of Selkirk.

“This new waste water treatment plant is a huge project for council and for the citizens of Selkirk. It’s a lot of money, but it’s a project that is absolutely necessary. The old plant can’t do what current regulations require in regards to waste water treatment and it’s important to us to be good global citizens – we can’t contribute unnecessarily to pollution of the Red River and Lake Winnipeg,” the mayor said. “Selkirk council takes its role as community leaders and environmental stewards very seriously and by replacing our old, non-compliant plant with this, a state-of-the-art facility that will be a friend to the environment and will service our citizens well into the future, it only makes sense.”

Knowing the magnitude of this project, the city went to great lengths to make sure it was doing things the right way. The city worked with an independent, third-party engineering firm to review seven different types of waste water treatment systems. Ultimately, the Membrane-Bioreactor Treatment process was selected, as it provides the best environmental protection for the Red River and Lake Winnipeg and it will be cost-effective over the full life of the plant.

The new plant will produce an exceptionally high quality of effluent, so if regulation changes in years to come, the city will still likely meet the standards without costly retrofits or new construction.

Nicol said the city’s Strategic Plan calls for public engagement as well as for the city to be good environmental stewards and on this project both those boxes can be checked off.

While their will be a public hearing next week, the legislative requirements don’t allow for a two-way conversation between council and citizens at that time. The open house held this week gave citizens the opportunity to ask questions and get answers.

“This is a big project, and the city has done its homework. The new plant will utilize the best technology available and we know that the public is concerned about being environmentally responsible, as are we,” Nicol said. “We always want the public to have the opportunity to be engaged, and to be able to ask questions. We’re always striving to improve our practices and this new waste water treatment plant takes a huge step in that direction, and we were happy to let the citizens see that at the open house.”

The waste water treatment plant will be cost shared with the federal and provincial governments, with each contributing $11.7 million to the project. The Manitoba Water Service Board will partner with the city as the project manager and will contribute just under $250,000.

The City of Selkirk will borrow $14,239,464 and will use $1,218,316 from its Utility Nutrient Removal Reserve Fund and $341,639 from its Water and Sewer Reserve Fund. Nicol said the city continues to look for efficiencies as well as applying for any grants that will help reduce costs.

Sewer charges to Selkirk residents will increase over four years, beginning in 2018, at a rate of 33 cents per cubic litre of water for the first three years and 36 cents per cubic litre in the fourth year. Nicol said this gradual increase to the rates was designed by the city to reduce the sudden impact to utility customers and to give them time to reduce their water consumption and therefore reduce the impact of the new treatment plant on their water bill.

The city is encouraging citizens to help reduce the impact of the increase by reducing water usage at home. Installing low-flow toilets and shower heads, repairing leaking faucets and hoses, using a front-load washer and collecting rainwater for use in the garden and to water lawn, will go a long way to in saving water and reducing your bill.