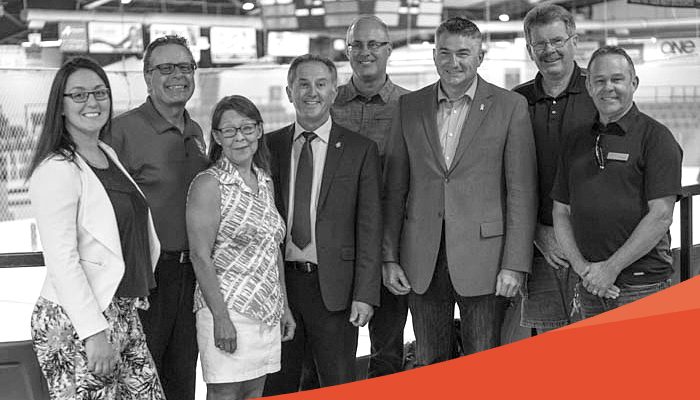 The City of Selkirk’s plan to extend the lifespan of one of its most important recreational facilities will move ahead as scheduled, bolstered by support from both the provincial and federal government. Selkirk MLA Dr. Alan Lagimodiere, was joined by James Bezan, MP for Selkirk–Interlake–Eastman, for an announcement that confirmed their support of renovations to the Selkirk Recreation Complex, the city’s primary centre for recreation.

“I’d like to thank both the Federal Government and the Provincial Government for their financial support for this project,” Selkirk Mayor Larry Johannson said. “The Small Communities Fund is a powerful policy tool that is helping communities like Selkirk renew and invest in themselves.”

The city announced plans for critical renovations for the facility about one year ago as part of its Recreation Strategy, a master plan to define the direction of recreational and cultural life in Selkirk in the years ahead. Work has begun in many areas and will continue in stages over the next 10 years of the plan that carries an overall investment of close to $1–million.

The renovations, which began last year, will target interior and exterior needs to revamp and enhance the entire facility and ensure its longevity well into the future. The project is expected to extend the lifespan of the complex by as much as three decades, ensuring its place as a regional recreational hub for the foreseeable future.

“This project is a perfect example of how the City of Selkirk is laser focused on delivering on the Strategic Plan that our citizens shaped for us – because it touches on four major strategic objectives: The first is providing the best possible recreation opportunities for Selkirk residents,” Mayor Johannson said. “This facility is a gem and provides recreational opportunities for all age groups and skill levels. From hockey to fitness walking – this facility is a core part of our recreation infrastructure. Its renewal ensures it provides these services for years to come.”

The project will be administered under the Selkirk’s Capital Asset Management Program (CAMP), which identifies what is required to maximize the value city–owned buildings. In the long run, CAMP is expected to create better infrastructure for less tax dollars.

“I want to recognize Selkirk Council for having the vision to establish our new Capital Asset Management Program which will pay huge dividends over the long-term,” Mayor Johannson said.  “Future councils will look back at this time and will be thankful for the vision and foresight of this council. I’m honoured to be part of this team effort.”

“Using experts to get good data on the health of our facility, we’ve identified the issues that could shorten the useful life of the building,” the mayor added. “By addressing those issues now, we will have a better building today and for the next 30 years. This project extends the life of our building and ensures we get the maximum returns on our infrastructure investments.”

Value to the Entire Region

By restoring the facility to its optimum potential, the upgrades will ensure the facility maintains its value to the entire region in addition to becoming an economic driver through its potential to generate revenue and increase tourism.
“The complex is actively used by residents of St. Andrews, St. Clements and people from all over the Interlake. A well-managed Selkirk Recreation Complex supports quality recreation services for our whole region,” the mayor said. “It also helps us to capitalize on Selkirk’s tourism potential. From regional tournaments to large national and international events, the Selkirk Recreation Complex has helped put Selkirk on the map. Who among us isn’t proud and excited when we hear the City of Selkirk’s name repeated on national sporting coverage? Over its life span, this facility has brought hundreds of thousands of people to our city.”

Renovating the Recreation Complex is also consistent with the City of Selkirk Strategic Plan priorities of creating a vibrant, healthy community while ensuring maximum value from community resources. This phase of the facility’s renewal is projected to cost just over $150,000 and will be shared equally between the city, the province and the federal government.