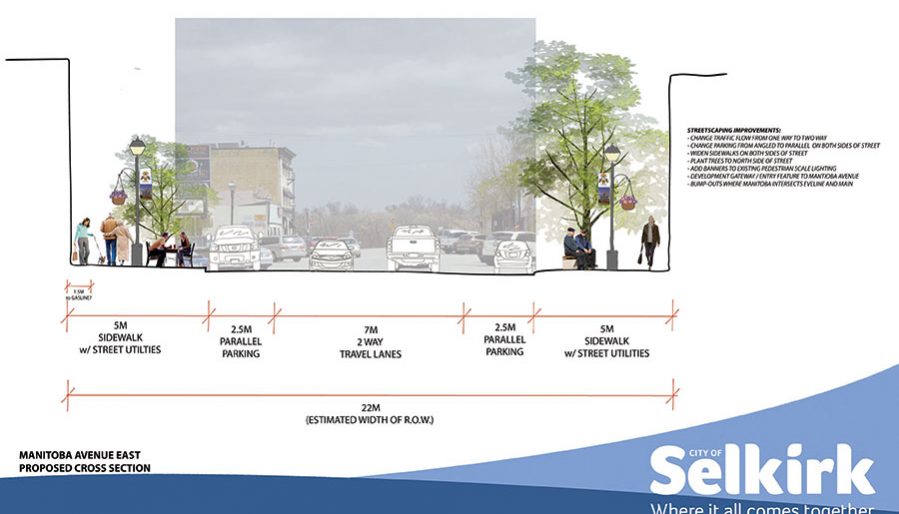 Excitement around renewal of Selkirk’s downtown is growing and the infusion of $1.7 million federal and provincial dollars last week through the Small Communities Fund has only added to it. The funds will kick the city’s Downtown Selkirk Renewal Strategy into the next gear, and will build on momentum already created through both the strategy and support from the private sector, which has embraced the concept of a revitalized downtown area.

“The dollars received through the Small Communities Fund are accelerating our Downtown Renewal Strategy, which is good, because we are seeing an acceleration from the community – we are seeing more private sector investment than we expected at this point,” Nicol said. “Marrying both the private sector and the public sector investment creates a synergy; we’re going to get more momentum and see bigger change, quicker.”

“Selkirk’s downtown holds endless possibilities with Manitoba Avenue East’s historic buildings and our Renewal Strategy will key into all the avenue’s strengths. It truly is a place where people will want to gather and our vision, the city’s and the community’s vision, is to accomplish that in a well-planned way,” Johannson said. “There’s been so much thought put into this renewal and I can’t wait to see what the end result will be and how much the citizens of Selkirk, and those who will come to visit our city, will enjoy it.”

Selkirk MLA Alan Lagimodiere said Manitoba government is pleased to support the city’s investment in its future through the redevelopment of its downtown.

“Our government understands that small communities and their residents depend on investments in important local infrastructure projects. With the Small Communities Fund, we are supporting priority, local projects all across Manitoba with investments in infrastructure that facilitates growth, improves quality of life and boosts regional development,” Lagimodiere said.

City council adopted its Downtown Selkirk Renewal Strategy last September, but work on revitalizing downtown actually began in 2012 with the formation of an advisory committee, chaired by Coun. Ken Beerman. Since then, there have been consultations with the public as well as existing businesses in the downtown and throughout the city.

The strategy looks at Manitoba Avenue East, along with the Waterfront and Water Tower, and the area from Rosser to Taylor avenues. Beerman said the community has bought into the idea of having a vibrant downtown and became immersed in the city’s planning for renewal. He said the city’s strategic planning, along with the public’s enthusiasm for the project, has proven to be a winning combination.

“The people of Selkirk have really taken to this concept, they want a downtown that offers them something – a place to go, a place to meet others and a place to enjoy a meal or a drink and some music,” Beerman said. “The city had the vision, but the community did too and it’s starting to come together. It was years of planning and engaging the public, and obviously it’s all been worth it. The end result is going to be incredible.”

The promise of a brighter future for the downtown has already attracted several new businesses to Manitoba Avenue East, including The Mighty Kiwi, at the corner of Manitoba and Eveline Street. Co-owners Miranda Schmidt and Jocelyn Kreml, both 22, (pictured above) said they wanted to be on Manitoba Avenue East because of the city’s commitment to renewal. They opened The Mighty Kiwi – which serves up healthy fare like smoothies and juices along with sandwiches, wraps and salads – in March and are thrilled so far with the community response.

“The city’s plan to revitalize the downtown was definitely one of the reasons we chose this location,” Schmidt said. “We also love a lot of the businesses already on the street, so we wanted to add to that and be a part of the community.”

Nicol said it’s the enthusiasm of business owners like Schmidt and Kreml that is starting to define Manitoba Avenue East. He said newcomers like The Mighty Kiwi and The Gypsy Trader, along with established businesses like the River Side Grill, Roxi’s by the Red and The Merchant Hotel, whose owners have made significant investments into their building and its now a great place to see live music, are forging a path for what will be the new downtown. He also pointed to Holiday Alley – a street festival that will fill Manitoba Avenue East with art, music, food and dancing the first weekend in December – as an indication of the community support for downtown renewal.

“It’s a great example of how the community is now embracing the downtown area, as the place to be, to celebrate, to recreate and to honour community,” Nicol said.

Some of the big ideas already captured in the conceptual plan include narrowing the laneway for traffic and widening sidewalks to improve walkability and make the area more pedestrian friendly. The plan calls for ‘bump outs’ at the corner of Main and Manitoba and Eveline and Manitoba and well defined crossing areas. There will still be on-street parking, but it will be parallel, not angle.

Faisal Anwar, the city’s director of sustainable economic development, said while the detailed design work is not yet complete and there will be more opportunity for public input, the city is poised to begin a grant program that will encourage improvements and development in the downtown area.

Anwar said targeted incentives for façade improvement and housing development, as well as incentives for new business creation and renovation or expansion are being explored.

“Having incentive programs for downtown renewal is a key component of our strategy,” Anwar said. “ We want to rejuvenate the downtown, and by extension the city itself, and these incentives will facilitate that. The downtown will be where people want to come for recreation and for an evening out with friends.”

City of Selkirk 33 mins ago

City of Selkirk 37 mins ago