A Celebration of Culture and Diversity 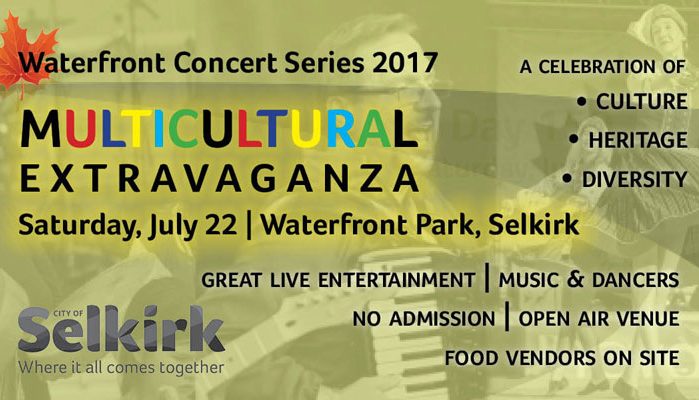 Canada’s cultural mosaic will be on full display this Saturday as the 2017 edition of the Multicultural Extravaganza hits the stage in the City of Selkirk. The third installment of the 2017 Waterfront Concert Series, this annual event will bring together a full evening of great entertainment that crosses an array of cultures and traditions.

The evening gets underway at 7pm with live music from SICH, a six member Manitoba band that specializes in Ukrainian Zabava-style music.

Glenaura Pipes and Drums will also perform, bringing a Scottish Highland element to the event. Founded in Selkirk in 1990 by the late Pipe Major Tommy Thompson, the band carries the traditional Scottish delight of seeing and listening to the stirring music of the highlands.

Another Selkirk group – the Fire Heart Women Traditional Drum Group – will bring their traditional hand drum sounds to the event. Fresh of a successful and well received performance in the city during Canada Day, the group performs as a circle for empowerment, healing and mentorship of women – both young and old, in the community.

The Aldeias de Portugal- Casa Do Minho Dance group will also appear with a pageantry of Portuguese dance as another highlight of the evening. See the full event lineup at MySelkirk.ca.

Multicultural Extravaganza gets underway at 7pm at the beautiful Waterfront Park in downtown Selkirk. Food vendors will be on site. Spectators are advised to bring their own chairs and arrive early for the best possible view in the amphitheatre setting of the park.

In the event of poor weather, the event will be moved to the Selkirk Memorial Hall. Watch MySelkirk.ca and the city’s social media pages on Facebook, Instagram and Twitter for more updates.