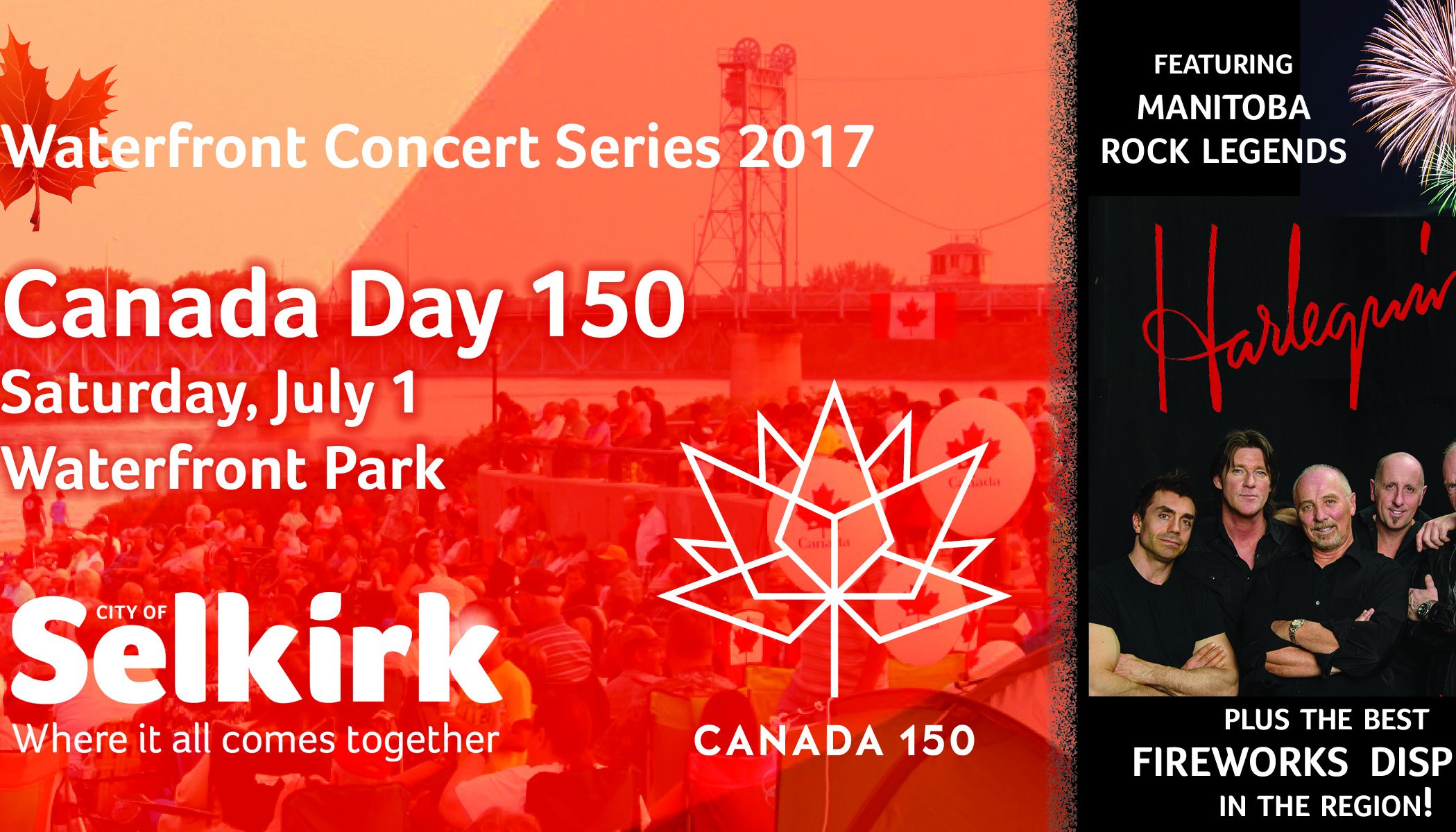 Canada turns 150 on Saturday and in Selkirk, the party is on! Canada Day 150 celebrations will be happening at Waterfront Park in Selkirk and everyone is invited to join the fun.

“Canada Day is always a great day here in Selkirk and this year promises to be even more special,” Selkirk Mayor Larry Johannson said. “I want to extend an invitation to everyone to come out and join us for what I expect will be a great day at Waterfront Park.”

Canada Day has become the signature event for the city in recent years, the crown jewel in its Waterfront Concert Series for 2017. This year features an appearance by legendary Manitoba rock and rollers Harlequin, followed by what organizers say will be the biggest and most spectacular fireworks display this city has ever seen.

“Our fireworks team has put in an amazing effort to get things ready for what we expect will be our biggest show yet,” said Ken Beerman, City of Selkirk Councillor and chair of the Canada Day organizing committee. “The crew here takes a lot of pride in making our fireworks show one of the best in the province.”

Ahead of the pyrotechnics, a full slate of entertainment and activities will be taking place at Selkirk’s picturesque Waterfront Park, beginning with a pancake breakfast at 9 am and the annual Canada Day Walk / Run (registration at 10 am). A raft of food vendors will be on site and open for business by 3 pm with live entertainment beginning on the South Beach Casino Stage at 4 pm with the 2–Man Band. Local favourites Aaron Starr and Double Bourbon will also appear on the South Beach Stage ahead of Harlequin on the Sunova Main Stage. Visit the Canada Day 150 page on the city site for the full entertainment lineup.

Selkirk’s own Fire Heart Women’s Traditional Drum Group will add an Indigenous flavour to the celebrations with a performance on Saturday afternoon along with the Selkirk and District Ukrainian Dancers and the Selkirk Community Choir who will perform O Canada, among other songs. Long–time Manitoba TV personality and entertainer Jimmy Mac will host the event that also features a unique Game Show that will involve members of the audience throughout the afternoon.

Although concern has been raised about possible bad weather, organizers confirm the event will run, rain or shine. If excessive rain makes performances difficult, the event may be moved to the Selkirk Recreation Complex. Organizers will determine if that is needed by noon on Canada Day and will announce the venue change on the city website – MySelkirk.ca – and through its social media platforms on Facebook – along with Instagram and Twitter @cityofselkirk.

Area residents are also reminded the Selkirk Bridge on the east side of the community will be closed for two hours – 10 pm to midnight – as a result of the fireworks display.

The City of Selkirk wish to thank all event sponsors including the Government of Canada, Sunova Credit Union, South Beach Casino, Canadian Tire Selkirk, and the Selkirk Home Hardware and Building Centre along with Media Sponsor the Selkirk Record.