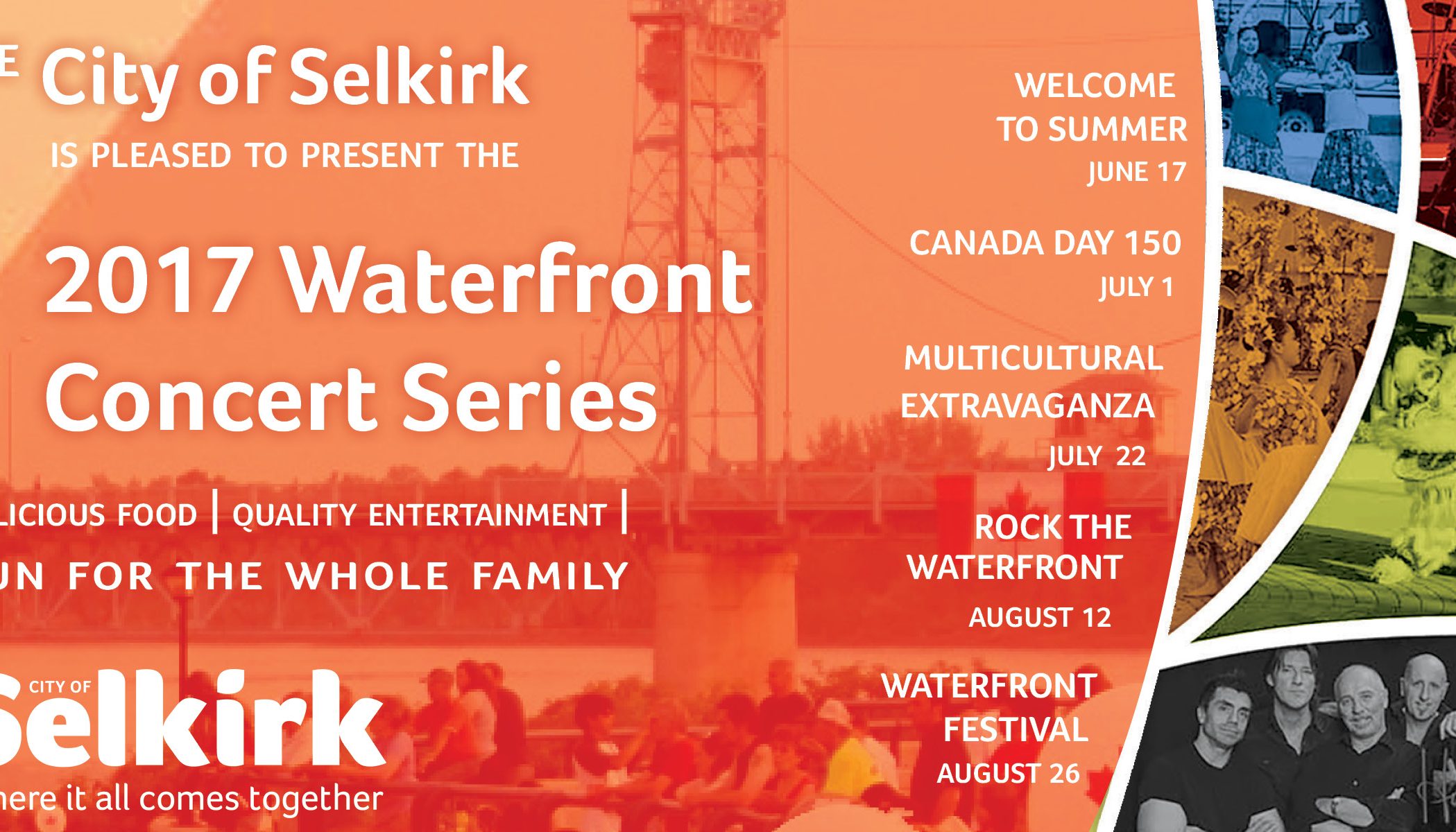 Summer nights in the City of Selkirk are due to warm up very soon with the launch of the 2017 Waterfront Concert Series. The event calendar for 2017 has now been finalized and will include five showcase evenings to be held at the historic Waterfront Park in the heart of the Steel City.

“The Waterfront Concert Series has really soared in its popularity through the years,” said Duane Nicol, Chief Administrative Officer of the city. “Each year, our events team works diligently to create first–class entertainment events that offer something for everyone.”

The first event of the season would seem to a good refection of that strategy. The Welcome to Summer kick–off event features Free Ride, one of the province’s longest running show bands, doing a three–set show that features tributes to the Beatles and a nostalgic look at the early days of rock and roll. The first event will take place at the waterfront on the evening of Saturday, June 17.

Next up will be the annual Canada Day celebrations – a day that has become the marquee event for the city in recent years. This year, our nation marks its 150th birthday so city organizers have added some extra flair for this year’s event – both figuratively and literally.

The entertainment bill is headlined by Manitoba rock legends Harlequin who were booked almost a full year ago to ensure their appearance at this year’s festival. Formed in the late 1970’s, Harlequin is one of the province’s most successful and renowned bands and continues to draw big crowds wherever they tour today.

Also appearing will be home–town product Aaron Starr who thundered into the music scene at the age of 16, wowing crowds and performing live for almost a decade. Aaron will lead his full band through a set of modern–day country that has proven popular with local crowds through his past appearances in and around the city.

A spectacular fireworks display will follow to close out the day – one that promises to be the biggest and best ever. Selkirk’s Canada Day fireworks had already been considered to be among the largest in the region and organizers are planning more than a little extra pop for this year’s special celebrations.

“As 2017 is a very special and significant year in our nation’s history, the organizing committee has increased the budget for fireworks, so it should make for an extra special show this year,” Nicol said. “Our crew, led by Joe Craig of our city fire department, always looks forward to Canada Day fireworks and this year they will be putting in the extra effort to make this a really memorable event.”

As always, the day will continue to offer many of the features that have been part of day in the past including the very popular geocaching event, a children’s area, horse–drawn carriage rides and a wide array of food vendors along with some crafters all along the waterfront site. Cultural entertainment will also be part of the program this year.

“Selkirk’s Canada Day is always a great time and fun, memorable event,” Nicol said. “Each year we keep seeing bigger and bigger crowds coming to our city to take in the entire day. With what we have planned this year, there’s every reason to believe this year’s will be one of the all–time best.”

For more information on the events planned for Canada Day go to myselkirk.ca/canada150

The Multicultural Extravaganza is next up only a few short weeks after Canada Day, on Saturday, July 22. The annual celebration of diversity and inclusion features Sich, a high–energy, Winnipeg– based group specializing in Ukrainian and other ethnic music.

On August 12, Rock the Waterfront returns to the city with a pair of classic rock tribute bands to two legendary artists. Bed of Roses, considered by some to be the world’s best Jon Bon Jovi tribute band, headlines the evening with a show that traces the history of the rocker from the start of his storied career in the 1980’s to present day. Sharing the bill will be Travellin’ Band, a tribute group for Credence Clearwater Revival, one of the most popular bands of the 1970’s whose music and appeal resonates among fans new and old to this day.

The 2017 series draws to a close with the Waterfront Festival on Saturday, August 26. Headliners for this event will be the B–Side Champs with a rhythm and blues revue.

Each and every event will also feature an array of food vendors on site to keep visitors well–nourished and refreshed. A selection of local crafters may also be on hand displaying and selling their many and varied wares.

The city wishes to remind everyone that WCS events are never cancelled due to weather. Indoor venues have been booked as back–ups for all events should Mother Nature choose to be uncooperative.

Travelers are also reminded that the bridge from East Selkirk will be closed on the evening of Canada Day to accommodate the fireworks display later in the evening. In the city itself, street closures will be in effect for Eveline Street and Manitoba Avenue for the duration of the day.