Fairtrade Workplace of the Year 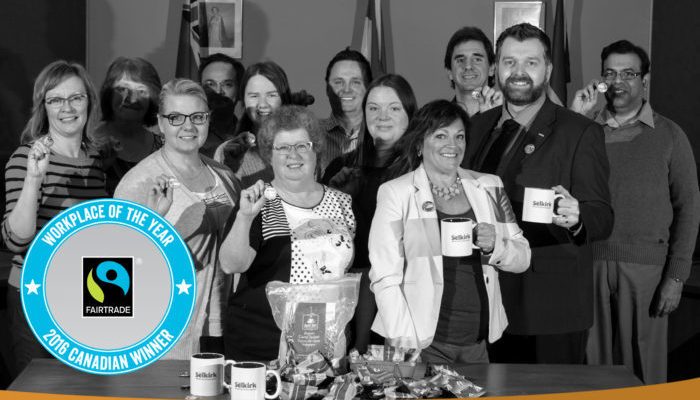 City of Selkirk Named Fairtrade Workplace of the Year

The City of Selkirk takes its role as a global city seriously and late last month was recognized for its efforts by winning the first ever Fairtrade Workplace of the Year Award.

The award, presented by Fairtrade Canada at its fifth annual Canadian Fair Trade Conference in Halifax, N.S., on Feb. 25, recognizes the city’s support for fair trade. The city uses Fairtrade certified coffee, tea and sugar in its offices.

Selkirk Mayor Larry Johannson said the city has a strong social conscience and recognizes that decisions mayor, council and administration make can impact not just citizens within the city’s boundaries, but others around the globe.

“I’m very proud of this council and all the people that work for the City of Selkirk for their dedication to supporting fair trade. We’re working hard to do the right things in our own back yard and by using Fairtrade coffee, tea and sugar in our workplaces, our support is crossing borders,” Johannson said. “We’re all global citizens, and when we make decisions that are better for someone in another part of the world, it’s fantastic. I couldn’t be prouder.”

CAO Duane Nicol said fair trade is an alternative approach to conventional trade and is based on a transparent and respectful partnership between producers and consumers.

Fair trade contributes to sustainable development by offering better trading conditions to, and securing the rights of, marginalized producers and workers – particularly in the global south. They get fairer compensation for their work, thus reducing poverty and child labour, while building the prosperity and resilience of families and developing communities.

Selkirk was certified a Fairtrade Workplace in March 2016. It’s Strategic Plan calls for the city to take care of the environment in several ways, including by improving city practices. Nicol says everyone at the City of Selkirk pays attention to the social and environmental impact of their decisions.

“Purchasing our Fairtrade certified coffee, tea and sugar is a very small change for us here, but it has a huge global impact. In today’s world, every city is a global city and we have to start thinking about that,” Nicol said. “The environment doesn’t recognize municipal boundaries. The best way we can contribute to that global equity, to environmental justice, is to make better decisions regardless of where the direct impact has been. Buying Fairtrade is a way that we can contribute to the health of the environment and global equity.”

Mélissa Dubé, Outreach and Marketing Manager for Fairtrade Canada, said the City of Selkirk has good reason to be proud of this award. “The City of Selkirk was not only the first municipality that became a Fair Trade Workplace in Canada, but they are also the first ever to receive this Award! A lot of firsts for this dynamic, committed and engaged workplace. Their leadership speaks loudly as they demand fair deals for Fairtrade producers of the Global South.”

Nicol said the city, along with Selkirk Biz, will begin working towards achieving Fairtrade Town status. Numerous criteria must be met, including having Fairtrade certified products available throughout the city, public awareness campaigns and community support.

For more on the awards ceremony, visit the Fairtrade Canada website.