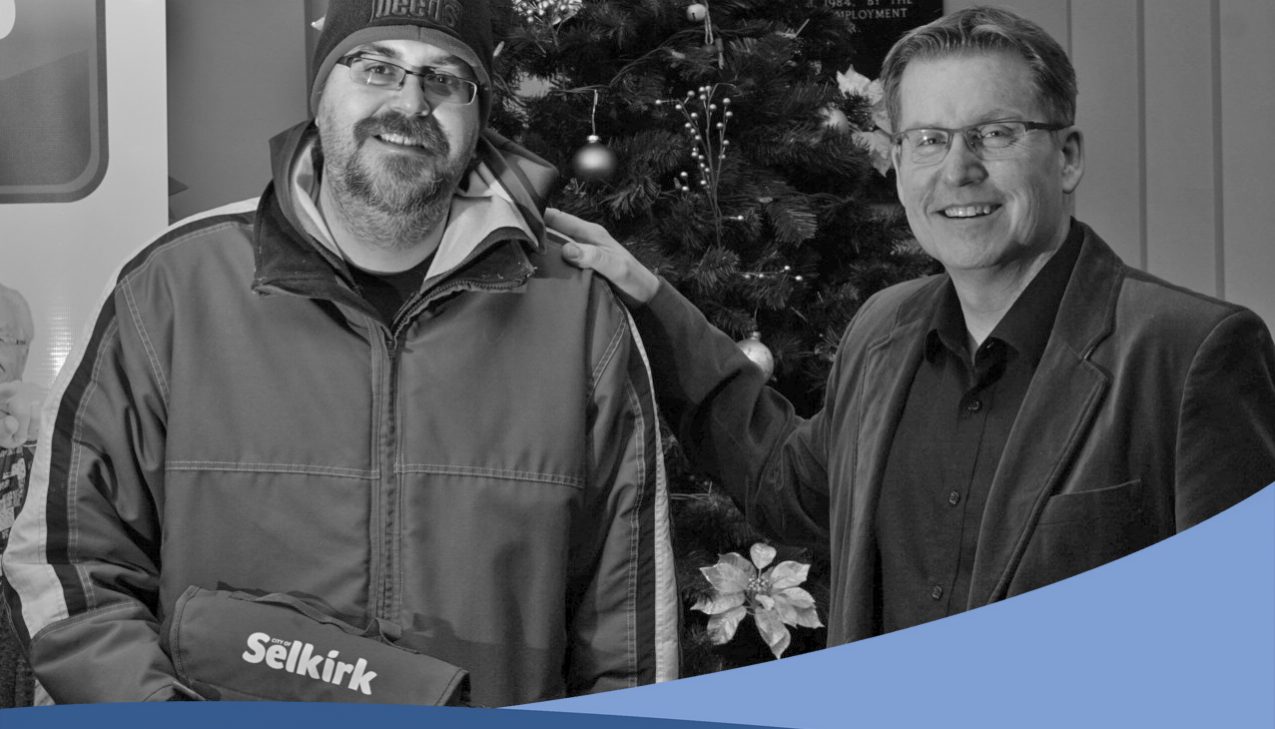 From Survey to Pilot Project: Selkirk Director of Finance Kevin Richter (right) presents Todd Dmitruk with a prize package for taking part in the City of Selkirk’s Water Survey. The city has now launched its Water Conservation Pilot Project (WCPP) to help property owners reduce water consumption and save on utility bills.

The City of Selkirk is offering property owners a chance to start 2017 off with a pilot program that will save in two ways – financially for you and environmentally for everyone.

The city has launched its Water Conservation Pilot Project (WCPP) that gives property owners the opportunity to replace their toilets with low-flow, eco-friendly, 4.8 litre Niagara Flapperless toilets that will use less water and may reduce your utility bill. The toilets and installation will be paid for in seven equal, interest-free, payments over two years.

Dan McDermid, the city’s Director of Operations, says the pilot project’s big benefit to city property owners is the cost savings, but the up side extends far beyond the pocketbook.

“It’s a big benefit to homeowners,” McDermid said. “They’re going to save money, they get a brand new toilet and they get to pay it off over seven payments. Their cost will be more than made up through all the water they save.”

The city is partnering with Manitoba Hydro’s Water and Energy Saver Program and participants can choose to have water conserving shower heads and kitchen and bathroom sink aerators installed at the same time.

The pilot project is limited to 500 toilets, on a first–come, first–served basis. Home and property owners can replace just one toilet or as many as they like, providing they apply before the supply runs out.

To be eligible, you must be a City of Selkirk property owner and have an active utility account with the city. Businesses may be eligible as well.

“If you have three toilets in your house that you want to replace, we’ll do three toilets, as many per house as you want. If you own an apartment block, we can change every single one in that apartment block if you want, but it’s the first 500 who sign up,” McDermid said.

Under the pilot project, the typical price for the toilet and basis installation, including taxes, is just under $380 per toilet. If you choose to also participate in Manitoba Hydro’s Water and Energy Saver program and have showerheads and sink aerators installed, there is no cost or installation charge to eligible Manitoba Hydro customers.

Savings will vary from home to home and toilet to toilet, McDermid said, noting very old toilets will be more inefficient and potential savings would be greater than those found when replacing ones that are newer. The number of people in the home and your commitment to conservation will also impact savings.

“This pilot project hits on all of Priority 5’s key points,” Beerman said. “The water conservation initiative shows that the city is developing in a responsible way and we’re not just putting our efforts into new development, but existing homes and properties as well. This gives long-time residents and new residents the same opportunity to do right by the environment and make good choices when it comes to water conservation. The icing on the cake for the homeowner is it will also save them money.”

McDermid says when city residents engage in water conservation practices, it helps the city’s bottom line, too. Less water usage saves city infrastructure and can delay capital projects, which saves the city money today and in the future.

“It’s an environmental savings and it’s a benefit to the city because the capital project that we might have to do, we may delay a few years because of this,” McDermid said. “We’re trying to reduce the amount of demand on the system by having people reduce the amount of water they use.”

To sign up for the WCPP go to myselkirk.ca/waterconservation, stop in at the Civic Office at 200 Eaton Avenue or the Operations Department at 739 Sophia Street. You can also call 204-785-4903 or email [email protected].

Ecofitt will do the installations. If the program is successful, the city will look at offering it again in the future.