City successful at caring, and finding homes, for dogs 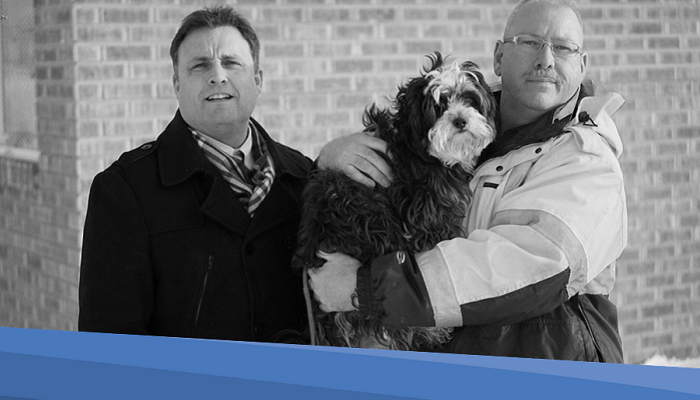 The City of Selkirk’s Animal Retention Facility has been the temporary home to 202 dogs since 2013 and it has a remarkably high success rate in re-homing dogs in its care.

Of the 202 dogs that came to the facility, either because they’re running at large or have been relinquished by their owners, only two have been euthanized and in both cases it was due to medical reasons.

David Thorne, the city’s Director of Protective Services, said the two bylaw officers responsible for the animals brought in to the facility go above and beyond to make sure they are well cared for.

“Caring for the animals at the facility is the first task of their day. They go let the dogs out first thing in the morning and make sure the outside runs and inside kennels are clean, and they check on the animals several times throughout the day,” Thorne said. “They care about the welfare of the animals in our care.”

That care was evident when a provincial Animal Protection Officer (APO) performed an unannounced inspection of the facility last month. The APO was responding to a complaint to the Provincial Chief Veterinary Officer that dogs at the Selkirk facility were living in unsanitary conditions.

The APO found no concerns with the treatment of four large-breed dogs and two cats that were housed at the facility during the initial unannounced inspection and a follow up with Thorne and a bylaw officer a day later.

Thorne said he welcomed the inspection of the Animal Retention Facility.

The APO’s report said the four dogs were in their own kennels, had food and fresh water as well as a dog bed to lie on. The APO learned that the bylaw officer who was looking after the dogs was actually on his day off, but still came in to care for them.

The APO’s report said the dogs appeared to be “in good body condition” and they were “playful and seemed happy”. The complaint was deemed “unjustified”.

Both of Selkirk’s Bylaw Officers received training from the Chief Provincial Veterinarian’s Office in relation to animal protection in 2014.

Thorne said the facility’s success in rehoming animals is due to the bylaw officers’ dedication to working with other agencies to find homes for the dogs.

The Selkirk facility works with the Winnipeg Humane Society and other Winnipeg area shelters to find homes for animals that are not claimed or have been relinquished.

The four dogs that were in the facility recently had been there for an extended period of time. The Winnipeg Humane Society and other shelters that Selkirk deals with were all experiencing high volumes of dogs and no one could take them in. For that reason, the city cared for the dogs for 2 ½ months. Thorne said all dogs have now been rehomed.

“Our guys really care about the animals. They want to see them go to good homes and the four dogs that were in our care recently are great examples of that,” he said. “They were here for a long time, but the bylaw officers took great care of them and did so until the other agencies could take over.”