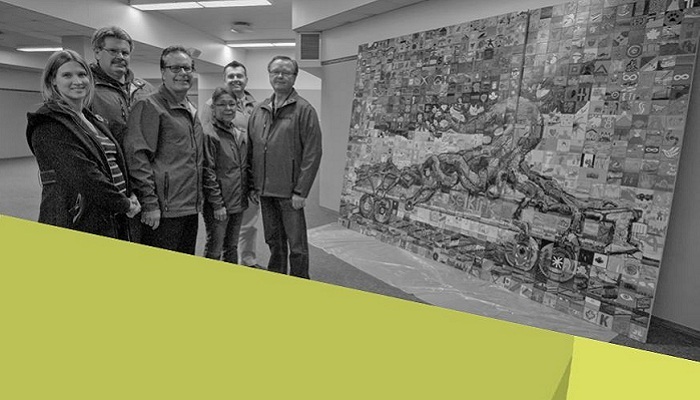 People in the Selkirk area have already painted their town red – and green and blue and a host of other colours – in anticipation of Canada’s 150th birthday next July by enthusiastically participating in the nationwide Canada 150 Mosaic Mural Project.

The City of Selkirk and the Selkirk Journal teamed up to educate Selkirk and area residents about the Mosaic Project, which saw communities across Canada paint individual tiles with images that express their thoughts on their home town and combine them with others to create their community’s own 8X12-foot mural.

By the end of 2017 a total of 150 mosaic murals will be created in communities from coast to coast, with the help of Mural Mosaic founders Lewis Lavoie, Paul Lavoie and Phil Alain, who have been orchestrating collaborative murals around North America since 2003.

The tree with roots was suggested as the theme for Selkirk’s mural by many residents, and summed up by Robin Jackson, who said: “This image will instill strength, pride and resiliency for our children and youth,” Jackson wrote.

“Trees must endure the most difficult weather and temperatures. Leaves fall but regrowth is possible.”

Mayor Larry Johannson said the Mosaic Mural is a fantastic tribute to Canada and a great representation of Selkirk and its people.

“This was a real community building exercise and Selkirk showed what a strong community we are. People of all ages and all backgrounds came out to create this iconic image of their home town and it’s just been awesome,” Johannson said.

“It really shows the pride people have in their community, and as mayor, I couldn’t be prouder of the way everyone embraced this project and came together to not only celebrate Canada’s 150th birthday, but Selkirk’s place in that history.”

Vanessa Figus, the city’s Marketing and Communications Coordinator, said residents of Selkirk, St. Andrews and St. Clements showed their true colours during the project and helped create an historic piece of art for the region and demonstrated their pride in their hometown at the same time.

“The Canada 150 Mosaic Project was a great way to get the people of the Selkirk area to embrace Selkirk’s history and to instil community pride,” Figus said.

“Everyone embraced this project and made Selkirk’s mosaic mural an incredible success and I’d like to thank everyone for taking this project to heart.”

Figus also thanked the Selkirk Journal for its role in spreading the word to Tri S residents. The Journal communicated the project well and was a driving force behind so many people showing up Nov. 5 and 6 to take part in the tile-painting workshop, lead by Alain.

The individual stories within the mural very special

Alain said the workshops were, well, works of art.

“It was fantastic. All the workshops were full, the people that came were familiar with the project before they even came to the workshop and they all had ideas of what they wanted to paint,” Alain said.

“The energy was fantastic and when people realized how they were actually creating a bigger art piece together as a community it was really exciting to watch their faces just light up.”

Liam Reich, 14, painted the Venturer logo on his tile Nov. 5, and, as the only member of the Selkirk Scouts Venturer  program, he hoped his tile might inspire others to join what’s been a huge part of his young life.

“I’ve been in the Scouts program all my life,” Reich said.

For Benjamin Francey, who painted the word ‘disAbility’ on his tile, he wanted others to know that people with disabilities do have ability. Francey has Leber congenital amaurosis, a condition that allows him to see shapes and colours, but not details. He will soon get special eSight classes that will help him see more clearly.

Alain said it was the individual stories that made the project so special, and he enjoyed hearing all of them, whether it was someone’s great, great grandfather’s importance to the area or Francey’s touching story.

“The community really did a great job and they did such a wonderful job following the instructions. The diversity of your community was one of the most exciting parts. There was just so many people from different backgrounds and they all came together to create such a cool thing,” Alain said.

Figus said the project was made possible thanks to a Government of Canada Celebration and Commemoration Program grant.

Figus said the city is looking for an appropriate place to display the mosaic and that it will be placed by next summer.