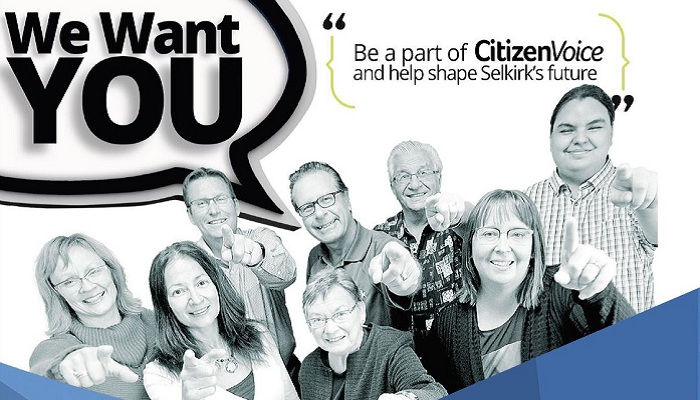 It’s an exciting time to be a citizen of the City of Selkirk, for numerous reasons, including the fact that right now you can take an active role in shaping the city’s future through CitizenVoice.

Selkirk is looking for people who want to play a key role in the city’s decision-making process by joining a team of citizens, representing all segments of the city’s population, who will offer their opinion on select projects.

The city has established CitizenVoice, a team who will be called upon to participate in online surveys throughout the year. The city is looking for a minimum of 400 people to join the team. Having as many as 1,000 people would be ideal, however 400 is the minimum number required for a survey representing a city the size of Selkirk to be statistically significant.

Engaging the entire community in shaping our future

The City of Selkirk’s Strategic Plan has five priorities designed to achieve the city’s long-term goals.

The first priority is to create a vibrant, safe and healthy community and one of the ways the city has pledged to achieve that is to engage the entire community in shaping our future.

CitizenVoice will do exactly that.

Mayor Larry Johannson said this council and administration have always solicited public opinion of city projects. He points to the Water Tower Lands development, the Manitoba Avenue Task Force, the recent Parks Survey and the Water Conservation Survey as examples of the city’s efforts to involve the public in shaping Selkirk’s future.

Creating the CitizenVoice team is the next step in the evolution of community engagement, he said, and encouraged all citizens to embrace the opportunity to make a difference in their community.

“This council and administration have always tried to engage the public whenever we could. Now we’re taking it another step, we want to have a group that we can go to and engage their input into future endeavours in Selkirk,” he said.

Faisal Anwar, Director of Sustainable Economic Development, said the CitizenVoice team will be a representative sample of Selkirk as a whole and will allow the city to get a true depiction of its citizen’s opinions.

“What we are doing is creating a team of citizens who represent our community demographics, to ensure the feedback we get is an accurate reflection of the actual opinions of our community,” Anwar said.

City in search of the best possible data

The city is partnering with Credit Union Central of Manitoba, (CUCM) who will manage the surveys and respondents. Credit Union Central of Manitoba is a trade association for 34 Manitoba credit unions and as part of its role, conducts primary and secondary research on a variety of topics for credit unions across the province. It has agreed to work with the City of Selkirk as its first client outside of the credit union system.

“We are excited to work with CUCM to make CitizenVoice a reality. They have the knowledge, experience and resources necessary to ensure we get the best quality of data and analysis possible.  Since we will be using this information to help Council make important decisions, it is critical that we are confident in our processes. This partnership takes our citizen engagement to a whole new level.”

Pasieka said that another benefit of working with CUCM is the confidentiality that the program will provide citizens.

“Sometimes people are hesitant to share their true feelings because they fear their comments are not confidential. By working through a third-party service provider, CitizenVoice team members can be sure their specific input is held in the strictest of confidence.”

The city is asking citizens to sign up by visiting MySelkirk.ca/CitizenVoice.

Vanessa Figus, Marketing and Communications Coordinator, said anyone who signs up between now and Nov. 25  will be entered into a draw to win one of three $100 Selkirk Biz gift certificates (now awarded. A second draw for there – $100 gift cards will be held on December 19). Every time team members participate in future surveys, they will again be entered into a draw.

The time commitment to be part of CitizenVoice is minimal, and team members will never be asked to attend meetings – they will simply agree to take part in short (8-10-minute-long) surveys approximately 4 to 5 times a year. The city is looking for a long-term commitment, but members can opt out at anytime.