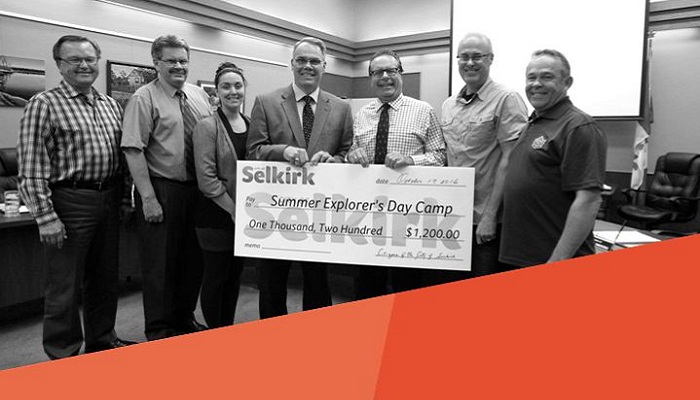 The City of Selkirk, through its Crime Prevention Advisory Board, renewed its commitment to supporting Selkirk and area youth with a donation to the Lord Selkirk School Division and its Summer Explorers program.

The city has been contributing to Summer Explorers for the past three years through cash and in-kind donations. Summer Explorers is a literacy and numeracy program that helps reduce summer learning loss while supporting academic development, building self esteem and providing life opportunities for at risk children from grades K-3 in four Selkirk schools.

At the Oct. 17 committee of the whole meeting, City Councillor and Crime Prevention Advisory Board chairman Ken Beerman presented Lord Selkirk School Division Superintendent Scott Kwasnitza with a cheque for $1,200.

Beerman said from a crime prevention viewpoint, providing funding for youth is “a no brainer”.

“We look at it in Crime Prevention as an opportunity,” Beerman said.

“We can’t really measure the affect, other than those that are attending are greatly benefitting, because they’re not wandering around Selkirk, they’re not doing anything that they shouldn’t be doing. They’re being engaged, they’re provided with a healthy snack and their minds and bodies are occupied in a very healthy way.”

Building partnerships throughout the community

Kwasnitza told council that he couldn’t be happier with the relationship the city has with the school division. It’s a relationship, he said, that is the envy of other communities, and he’s appreciative of all the city does for the division.

“The really big, good news is that we have a great working relationship with the City of Selkirk,” Kwasnitza said.

There are two, two-week sessions of Summer Explorers each year in July, run out of Daerwood School.

Besides a financial contribution, the city provides support through its Parks and Rec staff. The city also partners with the school division and shares resources from its Camp Awesome program. They share program staff, facilities and equipment as well as go on field trips together.

In the last four years, approximately 500 students have benefited from attending Summer Explorers and Camp Awesome.

City of Selkirk 36 mins ago

City of Selkirk 40 mins ago