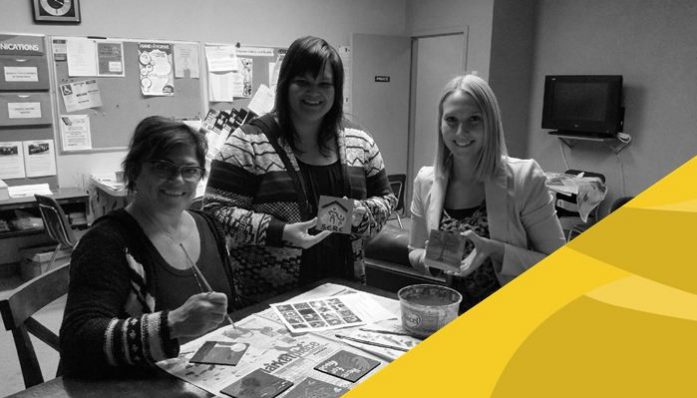 Selkirk’s Canada 150 Mosaic Mural has already started to take shape, now we need everyone from local clubs, teams, member’s local organizations like the Legion or Army, Navy Air Force to come together and put their stamp on the Mosaic.

If there’s more than one of you, you’re a group. And the City of Selkirk wants to hear from you.

(REGISTRATION FOR INDIVIDUALS IS OPEN AGAIN TOO)

City of Selkirk Marketing & Communications Coordinator Vanessa Figus says individuals from the Art Gallery, Lord Selkirk School Division, City of Selkirk Council and Administration, and Selkirk Journal have already pre-painted 200 of the Mosaic’s tiles. Several individuals have registered to paint tiles at the upcoming workshops, and now it’s time for groups and organizations to express themselves. The project is sponsored by the City and the Selkirk Journal and will be part of the celebrations for Canada’s 150th birthday in 2017.

Selkirk is one of about 150 communities from across the country that is participating in the Canada 150 Mosaic Project. The project will see 150 mosaic murals created with the help of Mural Mosaic founders Lewis Lavoie, Paul Lavoie and Phil Alain. The project fits with the City’s Strategic Plan in that it engages the community in shaping Selkirk’s future and, since the mural will be placed outdoors in the city so people can see it, it develops Selkirk’s natural features and outdoor spaces.

Each 8×12-foot mural will contain about 800 individual tiles, painted by the community to reflect their vision of what Selkirk is. Everyone’s idea of their home community is different, and that’s what the tiles will reflect. In the end, they will all be placed together to create an image of a tree with roots, attached to a steel beam, riding on a railway flat. Murals from all communities will be riding on a railway flat as trains and railroads are the connective theme of the 150 Mosaic Mural.

The City of Selkirk and the Selkirk Journal have been updating the community on the project and asked for suggestions of what Selkirk’s mural should be. Figus said the steel beam was a natural nod to Selkirk’s steel mill history, and a number of people suggested the tree with roots, including Robin Jackson.

“There were a few individuals that suggested the tree with roots, but it was her explanation, along with the image, that really connected,” Figus said.

Jackson’s narrative on why a tree and roots should stand to represent Selkirk was powerful.

“This image will instill strength, pride and resiliency for our children and youth,” Jackson wrote.

“Trees must endure the most difficult weather and temperatures. Leaves fall but regrowth is possible.”

So if you belong to a team, a club or even a business, please take the opportunity to be part of this defining moment for Selkirk, and Canada, on the occasion of our country’s 150th birthday.

The painting workshops will be held on Saturday, Nov. 5th and Sunday, Nov. 6th at the Selkirk Recreation Complex.

You must contact Figus by phone or email to register. Go to myselkirk.ca/mosaic for more on the Canada 150 Mosaic Mural Project. This project has been made possible in part by the Government of Canada.

Thank you to the Selkirk Journal for being our media sponsor