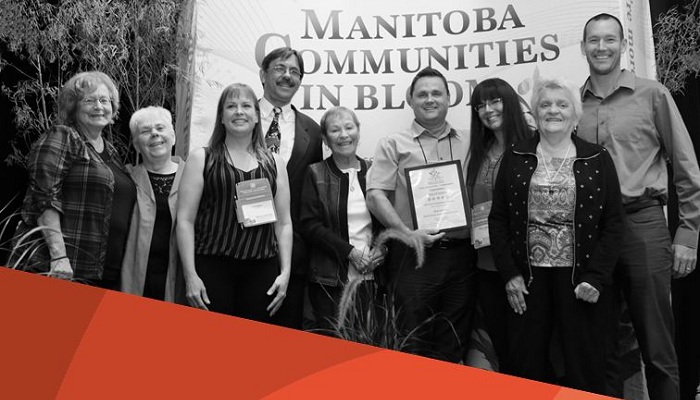 From left to right:

The City was awarded Five Blooms – the highest rating – at the Manitoba Communities in Bloom Conference and Awards held in Stonewall Sept. 9 and 10.

Chris Carruthers, Director of Culture, Recreation and Green Transportation and the city’s representative on its Communities in Bloom committee, said the top rating reflects on everyone who takes pride in their community.

“It’s the first year we’ve received five blooms and it speaks to City staff who do the lion’s share of the work and who have raised their game each and every year since we got involved,” Carruthers said.

“But equally important is the partnerships in the community, that’s a big deal. Individuals and groups are doing their part to improve their city, and that’s reflected in the five blooms.”

Communities in Bloom has been active in Manitoba for 18 years and while its name, to some, implies that it’s a predominantly flower driven organization, that couldn’t be further from the truth.

It’s an organization that promotes civic pride and respect for history, the environment and community beautification, all wrapped into one.

In earning its five blooms, Selkirk received a score of 82 of a possible 100 and earned special mention for the Gaynor Family Regional Library and urban prairie.

Selkirk Mayor Larry Johannson said the city staff and all community members can share in the five-bloom award.

“Kudos to Chris Carruthers and all City staff, they do an awesome job. I know how hard they work, and residents of the city too, have worked very hard to get this five bloom rating,” Johannson said.

“The Communities in Bloom committee does a great job, and the members of the Horticultural Society do as well. It’s nice to see everyone working towards improving the city. I couldn’t be more proud.”

Duane Nicol, the City’s Chief Administrative Officer, said this achievement is a good measure of progress the City has made as of late.

“We continue to see private businesses and citizens reinvest in their properties. We see a growing civic pride in Selkirk. This achievement is a reflection of the momentum building we see and feel in our community and it tells us that we’re on the right track. It encourages us to keep working hard on the objective set out in our strategic plan,” he said.

Earning the top Communities in Bloom rating fits in with Selkirk’s strategic plan, priorities 1 & 5, which call for a vibrant, safe and healthy community and environmental stewardship.

“Our strategic plan speaks to building a vibrant, healthy and environmentally responsible community – one that enhances the day-to-day lives of residents. That’s Communities in Bloom,” he said.

He gave numerous examples of city projects that fit the criteria, whether by design or not. The city established at perennial garden a few years ago, worked with Our Daily Bread Soup Kitchen and Growing Years Family Resource Centre to establish a community garden, improved trails and trail signage throughout the city and added a splash pad at the Selkirk Pool. The city also does its own composting and placed bat houses in Selkirk Park.

“These things weren’t necessarily Communities in Bloom projects, but it all factors in,” Carruthers said.

With the five-bloom rating, Selkirk is now eligible to compete at the national level, but Carruthers said they won’t do that immediately. He said they plan to improve even more in the coming years before stepping onto the national stage.

“What we want to do is get better. There’s still room to improve. We’re at 82 per cent of the 100 per cent criteria, so we can still get better,” he said.

“We’ve raised the bar to this level and we’re going to raise it every year through our day-to-day activities and our partnerships.”