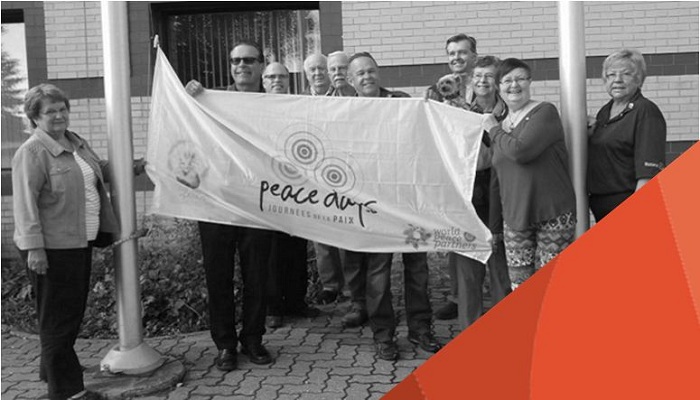 The City of Selkirk joined communities around the City of Winnipeg in raising a Peace Flag at 9 a.m. Sept. 9 to help launch the seventh annual Festival of Peace and Compassion, running in Winnipeg from Sept. 11 to 25.

Peace Days began in 2010, inspired by Rotary World Peace Partners, and the City of Winnipeg has held various events over the years to celebrate the United Nations International Day of Peace, which is Sept. 21 each year.

This year, a request went out to a number of neighbouring communities to raise a flag in honour of Peace Days and help launch the celebration.

City of Selkirk Mayor Larry Johannson said Selkirk council was happy to support Winnipeg in its efforts to spread the message of a worthy cause.

“Supporting efforts to make the world a more peaceful place is something we want to be part of. We’re honoured to support our neighbours in Winnipeg in this effort,” Johannson said.

Selkirk’s first of many years to participate

Marcia Bilkoski, President of the Selkirk Rotary Club, was thrilled the city was playing a role in such an important event.

“Peace Days is a creation of the Rotary District 5550 World Peace Partners. Everyone celebrates peace in their own way,” Bilkoski said.

“Today we hope to sow seeds for peace in our community and around the world by raising the Peace Day Flag, which will fly all weekend.”

A flag raising ceremony was held at the City of Selkirk Civic Office at 9am Friday, September 9; simultaneously along with eight other Manitoba communities.