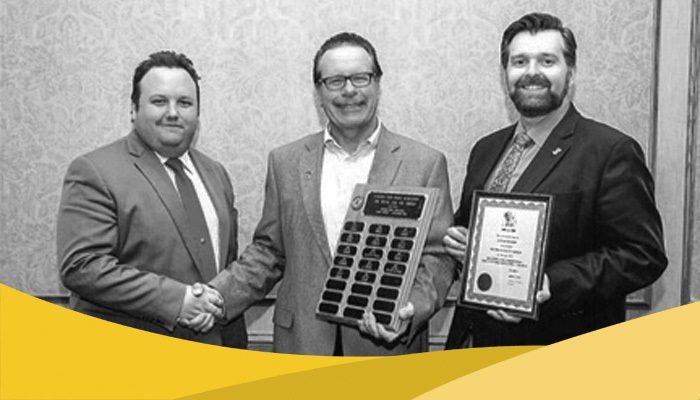 “It was an honour and a privilege to accept the award in Brandon, the only thing that would have made it better would have been if all 10,000-plus residents could have been there getting it with me,” Johannson said.

“Everybody from Greenwood to Oliver Avenue and in between, I mean everybody really takes pride in their neighbourhoods and their yards. It’s just a pleasure to see. I think we’re all really doing our part.”

Johannson said the city has made improvements, like new garbage and recycling bins located throughout the city, that make it easier to keep the city clean and tidy and he thanked city staff for their dedication as well.

“We all should be proud, we’re all part of the team that’s working hard to keep our community pristine. And this award shows also that other communities are looking at our community and realizing it’s a great place to be,” he said.

CAO Duane Nicol said the award is indicative of a sense of pride in community that is, more and more, becoming the norm in our city.

“I think this speaks to all the work we’ve been doing in the community to improve the overall aesthetic appearance of the city,” Nicol said.

“It’s an important part of quality of life and people feeling proud of their community.”

Nicol said that community pride is evident in businesses that have made improvements to their storefronts and individuals who work hard to make sure their home and yard are in tip-top shape.

“As the community starts improving and cleaning up and being beautified, other people get on board and they want to do the same thing. It’s a trend that we’re definitely seeing the uptake in,” Nicol said.

Dan McDermid, director of operations, said several city employees have taken their arborist training course, which enables them to better care for the city’s urban canopy.

Chris Carruthers, director of culture, recreation and green transportation, is the city’s representative on the Communities in Bloom committee. The volunteer committee works to improve the city’s green space, but also things like heritage properties and environmental stewardship.

He said city staff are continually improving their knowledge of plants and plant management and they’re working towards more environmentally sound practices that will see the city flourish.

“We no longer use city water to water the flowers, we’re completely off that grid, and we’re moving towards more perennials and getting away from all the annuals and it’s not just the extra expense but it’s more diverse,” Carruthers said.

“We’ve set ourselves up with a pump and a little pump house at the river at the waterfront so we fill our tanks with river water. We’ve saved a fair amount of money and it’s greener and we’re really trying to go that way.”

The city has also started its own tree farm that will allow staff to plant trees in city parks about every five years, as the trees mature.

Other beautification initiatives include new garbage and recycling receptacles throughout the city and new picnic tables at the waterfront. The city has also improved its curb-painting program by repainting more often. Improvements have been made to Stuart House, and spearheaded the removal of the MS Lord Selkirk II from the slough.