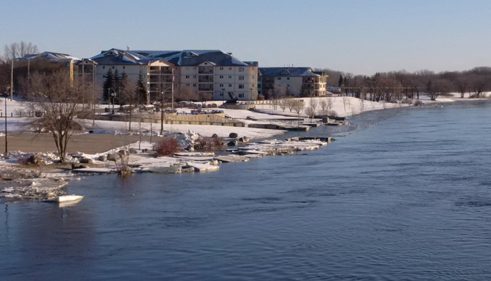 An ice jam has occurred north of Selkirk at McIvor Lane in St. Andrews causing surface ice to build up from that point southward towards Sugar Island, however river levels have been declining in Selkirk for the past 12 hours.

The river still exceeds its banks and Selkirk docks remain underwater. The City has implemented its standard spring flooding plan and continue to monitor river levels and is maintaining the appropriate state of preparedness. At this time there are no private properties within the city threatened by the elevated river levels.

The river current is extremely strong and carries with it dangerous floating ice and other debris. For safety, the City asks all residents and visitors to remain behind City barricades and to stay away from the banks of the river. Do not park or stop your vehicle in-front-of or near City barricades as this may interfere with City crews.

This site will be updated if and when the status of the City’s state of preparedness is escalated.

PUBLIC NOTICE: Roadways in and around Selkirk Park to experience higher traffic volume for Convocation in the Park this Thursday
June 23, 2020