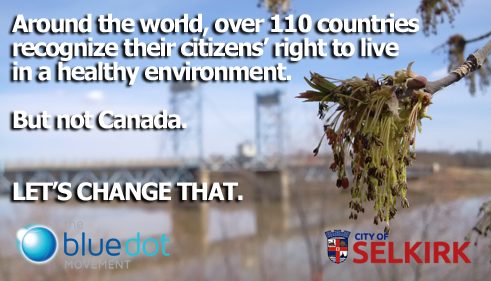 Council adopts Declaration of the Right to a Healthy Environment

With the resolution, the city endorses the Blue Dot Movement, started by the David Suzuki Foundation, and adopts the City of Selkirk Declaration of Right to a Healthy Environment.

Environmental Stewardship Already A Strategic Priority for the City

The principles of the Blue Dot Movement are closely aligned with the City of Selkirk’s Strategic Plan and its priority of environmental stewardship. The new declaration brings into play numerous projects and initiatives the city has already been working on, and will add new ones as well.

Mayor Larry Johannson said environmental issues are important to city council, and all members take pride in working towards a healthy world, starting with our own community.

“We all have a role to play in protecting the environment, for our sake and the generations to come,” Johannson said.

“The city takes its responsibility seriously to do all we can to protect the environment and this declaration takes our role one step further.”

Chief Administrative Officer Duane Nicol said the city’s own environmental priorities reflect the Blue Dot Movement and its aim to solidify citizens’ rights to have access to things like safe food and water and the right to breathe clean air.

Building a Plan and Taking Action

The declaration calls upon the city to specify objectives, targets, timelines and actions it will take, within its jurisdiction, to fulfill citizens’ rights to a healthy environment. Nicol said the city will complete the plan by Dec. 31, 2017.

Nicol said that much of the work the city is currently doing aligns with the goals of the movement and its call for a healthy environment. The declaration sets out 10 priority actions and numerous city projects already fall in line with those actions. The city’s development and zoning plans encourage sustainable land use, which fits with the priority action to ensure equitable distribution of environmental benefits and burdens within the municipality, preventing the development of pollution hot spots.

Another priority calls for responsible density increases and the city is redeveloping its zoning bylaw to encourage more responsible land use, including increasing density where appropriate, and the city’s development fee structure encourages infill and multi-family development while providing disincentives for sprawl.

The city’s transit system and its new community trails, which will become part of a full active transportation network as per the recommendations of the recreation master plan, fall under the priority of making walking, cycling and public transit preferred modes of transportation.

By adopting the declaration, Selkirk is the 124 community to pass such a resolution and joins with several other cities and municipalities in the province who have signed on to the Blue Dot Movement. The province has already introduced legislation to create a provincial bill of environmental rights. Other provinces, like Ontario and Quebec, have already done so.

A change to the Charter requires seven out of 10 provinces, representing more than 50 per cent of the Canadian population, to recognize the right to a healthy environment through legislation.

Citizens Can Join the Blue Dot Movement Too!

Individuals can also register their support for the Blue Dot Movement at www.bluedot.ca.