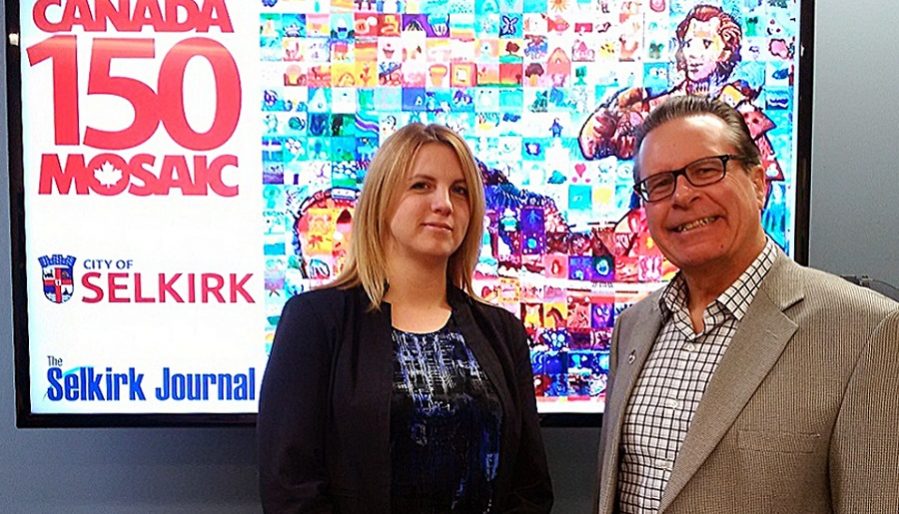 Journal and City of Selkirk team up for ‘unique’ project.

The City of Selkirk and The Selkirk Journal are joining together to help Selkirkians put their creative stamp on a monumental piece of art that will celebrate Canada’s 150th birthday in 2017 and paint a defining image of our community at the same time.

Selkirk is one of the anticipated 150 communities from across the country that has been approached to participate in the Canada 150 Mosaic Project. The project will see 150 mosaic murals created with the help of Mural Mosaic founders Lewis Lavoie, Paul Lavoie and Phil Alain. The St. Albert, Alta., trio has been orchestrating collaborative murals around North America since 2003. Some of their more prominent works include murals featured at the 2010 Vancouver Winter Olympics and the 2012 Summer Olympics in London. Future projects include an NBA All-star mural and two murals in Ontario.

Jenifer Bilsky, regional director of advertising for the Journal, said she’s excited to partner with the City of Selkirk on the Canada 150 Mosaic Project to celebrate the country’s 150th birthday.

“I’m excited about the mosaic mural, it’s a unique project. It’s an opportunity for The Journal to show our pride in the community in Selkirk and, on a bigger scale, for Canada,” Bilsky said.

“It’s a unique way for us to come in at the community level and be involved in such a big national project.”

Bilsky said the 150 Mosaic will shine a spotlight on Selkirk’s strong arts community as well.

The Journal will announce ways for the community to be involved with the mural all year long with updates and stories in the paper. The City of Selkirk website will host an online idea submission form for the community to submit their ideas of what the mural should represent. Filling the form out enters you to potentially paint a tile on the mural.

The train and railroads – both of which played an important role in bringing communities and the country together – is the connective theme of the 150 Mosaic Mural.

The people of Selkirk will work together to create an 8×12-foot mural over the course of 2016. Some pre-painted tiles and as many as 600 unpainted tiles will be delivered to Selkirk for community members to paint images on; all of the tiles combined will create our mural. Workshops will be held and mural instructors will come to Selkirk to support the project. You don’t have to be an artist to participate – everyone is welcome. Once completed the mural will be mounted, clear coated and photographed. The mural will be permanently displayed in Selkirk and connected virtually to the other murals on Canada150Mosaic.com.

Selkirk Mayor Larry Johannson said being able to take part in a national celebration is a great opportunity for the people of Selkirk and he knows they’ll embrace it.

“This is really fantastic. The biggest thing with the Canada 150 Mosaic Project is being able to engage the community and have everyone involved,” Johannson said.

“The idea of going to the people and asking them to give us their ideas, asking what does Selkirk mean to you? What image do you think of when you think of Selkirk? Canada has such a rich history, and Selkirk has such a rich history too. The waterfront, the fisheries, the tourism, how the commercial area has developed in Selkirk, the bridges, the history is really, really rich. As mayor I’m excited to see what people will come up with for ideas and what they’d like to see on there.”

Vanessa Figus, City of Selkirk marketing and communications coordinator, said the Canada 150 Mosaic Mural provides a great opportunity for people to become engaged in their community. The mural will salute our history, but also shape our future and that aligns with Selkirk’s strategic plan perfectly.

“I think it’s important the community really feels as though they are part of this project. I can’t wait to see what people submit as their one iconic image of Selkirk,” Figus said.

We want you to be involved!

The City of Selkirk and The Selkirk Journal want you to submit your ideas for inclusion in the mural. So what we want to know from you is – what image best represents Selkirk to you? It might be a historic moment in Selkirk’s history, or maybe it’s an ox cart, York boat or the Big Blue Bridge, with its lift that allowed ships carrying cargo and people to travel down the Red River. From our proud Indigenous heritage to the steelworkers’ blood that flows in so many of our veins, the available imagery is endless.

We need the ideas and the creativity of the people of Selkirk to make our part of the mural a reality.

Ideas can be submitted online at MySelkirk.ca/Mosaic , in person at the Selkirk Civic offices at 200 Eaton Avenue or by mail to: 200 Eaton Ave. Selkirk, MB  R1A 0W6; or dropped off at the Selkirk Journal office located in the Town Plaza Mall at 366 Main Street.

For more information on how to become a part of Selkirk’s Canada 150 Mosaic Mural contact:

City of Selkirk 52 mins ago

City of Selkirk 55 mins ago