Budget 2016 invests in Selkirk today to build a better tomorrow 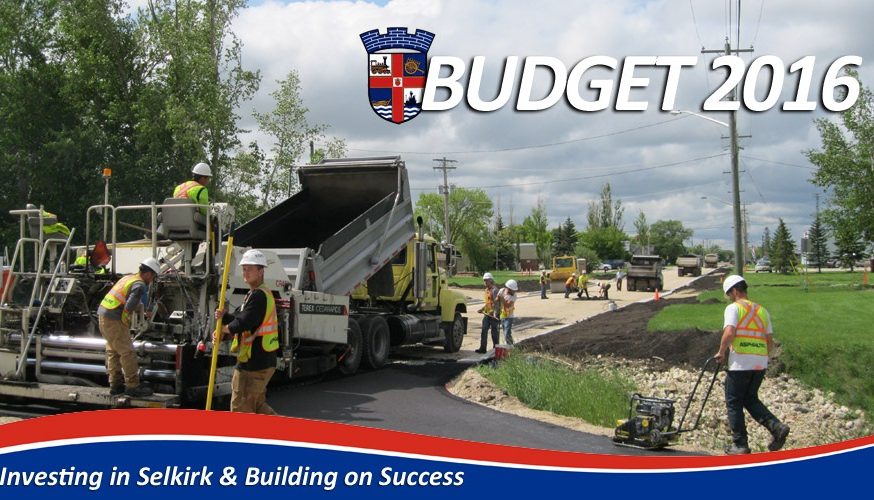 The City of Selkirk’s Budget 2016 takes aim at infrastructure, both external and internal, and with the strategic plan in mind, concentrates on building the city’s capacity to facilitate economic growth and modernize its municipal government.

For the second consecutive year, the city has completed its budget before year’s end, providing a competitive advantage when it comes to projects slated for work in 2016. Projects can be tendered sooner, allowing the city to get to work started quickly and at the best price possible in the short summer season. The budget was approved at council’s Dec. 29 meeting.

Mayor Larry Johannson said 2016 will be an exciting year, with many important projects taking place. He said city management has once again delivered a strong budget that keeps increases to a minimum and delivers the best bang for the buck.

The focus on infrastructure is important, the mayor said, because it’s an investment in Selkirk’s future.

“It’s not the sexiest stuff out there, what we’re doing with infrastructure, but in order to move the city forward and be viable in the future and to be ready for all the investments and development, there’s been a lot but there’s a lot yet to come, we have to do it,” Johannson said.

Johannson said the growth in the city’s tax base – achieved through strategic planning – allowed council to keep the increase to a minimum.

External infrastructure, things we all rely on daily such as roads, sewer and water pipes, buildings and city equipment, get much attention in the new budget.

A reliable water supply is a priority in the city’s strategic plan, and the city will invest $4 million into a new water source that will ensure Selkirk’s water supply is safe and abundant for today and decades to come.

Road improvements will once again be a priority in 2016 and the city will invest $1.14 million to make Selkirk streets better. Jemima Street will be resurfaced and water mains reconstructed from Manitoba to Queen; Sophia Street will be reconstructed and paved from Queen to the railway tracks; and detailed design plans for Manitoba from Main to Easton and Easton to Hwy. 9A will be completed. A Manitoba Avenue West road improvement plan will be developed and designs for the west end truck line and sewage lift station, to facilitate future growth to the west, will be undertaken.

City of Selkirk CAO Duane Nicol said investment in the city’s infrastructure now is also an investment in Selkirk’s future. And, having dollars ready allows the city to capitalize on provincial and federal dollars when they become available.

“We continue to increase the investments we are making into our aging infrastructure to slow the growth in disrepair. We will make the best use possible of every federal and provincial grant available to us,” Nicol said.

“We are investing in new infrastructure, which is opening new opportunities for commercial, industrial and residential growth. Encouraging efficient and cost-effective growth will expand our tax base with minimal growth in annual city expenses.”

Budget 2016 also invests $440,000 in the city’s recreational infrastructure and the Rec Complex, Selkirk Park, including the campground and pool. The Waterfront and the community trails will also see improvements.

The Rec Complex will become more energy efficient and its lobby will be upgraded making it more comfortable for users. The outside parking lot stairs will also be replaced. The pool enhancement project will be completed and the campground showers remodelled. Additional funds will go into The Waterfront events budget, slip dock cover replacement work will continue and a budget will be established for the community trails.

“We continue to invest in our No. 1 asset, our people,” Nicol said.

“The city is best served when it has an engaged, well-trained, talented and innovative civil service. We will continue to invest in staff skill development and leadership training. We will also continue to invest in improvements to our technology, ensuring our people have the tools they need to deliver quality municipal services.”

The city will invest $100,000 in capital asset management software, which will help manage the city’s massive asset inventory. The software features cutting-edge modelling and predicative applications that help in planning future infrastructure works and the investment and debt systems that will help fund future projects.

A new and improved city website was launched in 2015 and in 2016 more investments will be made to make the site even more user friendly. The city will re-evaluate its organizational structure and realign and provide new resources in key areas.

“These changes will help us build the municipal government we need to maintain our current momentum and support a larger, more vibrant Selkirk in the future,” Nicol said.

The city is also working to improve planning and development strategies. Council is redeveloping its zoning bylaw and creating the Annie West Development Plan that will support its efforts to build a more modern, cost-efficient urban community. Better land use and progressive practices will build a more sustainable community and growth, along with diversity of the city tax base, will keep new infrastructure and operating costs to a minimum.