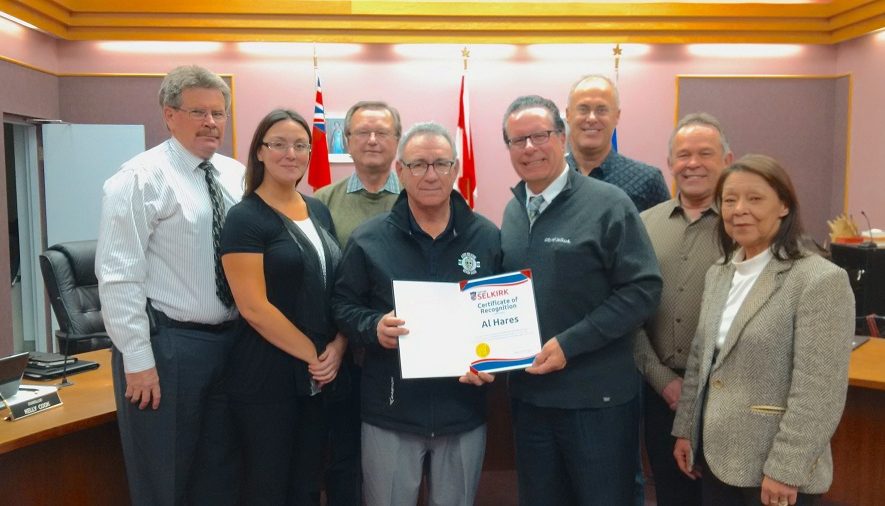 The City of Selkirk has paid tribute to Al Hares with a Certificate of Recognition for his decades spent coaching hockey and mentoring young players, guiding them towards success both on and off the ice.

Hares, 70, was inducted into the Manitoba Hockey Hall of Fame in October, and Selkirk Mayor Larry Johannson and members of city council recently awarded him with a Certificate of Recognition. Hares has been lauded by the game’s upper echelon, most recently during Roger’s Hometown Hockey, which came to Selkirk and sought Hares out for a feature during an NHL broadcast. And his story, widely told in local newspapers over the decades, even appeared in the nation’s news magazine, McLean’s, in 2014.

The attention paid to his hockey life causes the amicable and extremely quotable Hares to shrug, and easily draws him back to talking about where his attention has always been – on the ice with the players. In fact, his basement is a shrine to those players, from the young kids up to the Steelers, and of course, the team he’s most recognized as being part of, the Junior B Fishermen.

“I have a picture of every team I ever coached, every kid that’s been on the team,” he said.

“My office is full of nothing but Fishermen stuff from over the years.”

Johannson said there couldn’t be a more deserving recipient of sports accolades than Hares.

“He’s a hockey icon in the City of Selkirk. There’s just no other way to put it. He’s a legend in his own time and the hockey kids that have gone on and excelled, learned under him and got better under him, they learned not only hockey skills, but life skills also under Al. It’s tremendous.”

Hares grew up on the ice at The Barn, the old Selkirk Arena, and he spent his life coaching Selkirk teams, including the MJHL Steelers and the Junior B Fishermen, to scores of thrilling victories and legendary championships. Countless young players, including Alfie Michaud, Andrew Murray and Darren Helm, to name a few, went on to professional careers and benefitted from Hares’ tutelage.

He and his wife Karen raised their children – Tracey, Cale, Leigh and Scott – in Selkirk, and they were all part of hockey life in their hometown.

Hares has endless hockey stories, many of which, he laughs, have to stay in the dressing room, not fit for publication.

He was named Hockey Manitoba’s Volunteer of the Year for 2013-14 before his recent induction into the Hockey Hall of Fame. He said the days leading up to the induction were exciting, but having been through the stresses of having to give a speech already, Hares said for this latest one, he opted to ignore the nerves and do it his way.

“I guess a year ago… it was kinda easy, though I fretted for a couple weeks before. I wrote the speech and I put it all together and I memorized it in my sleep and it was unbelievable the shakiness I was in,” he laughed.

“And when this came along I said ‘I’m not doing that. I’m just gonna write out what I want to say and say it from my heart. Let ‘er rip’.”

Hares’ dedication to the sport and coaching is obvious. Year’s ago, after having some health problems that failed to keep him off the bench for long, he told a local newspaper that if he’s gonna leave this world, he might as well be behind the bench coaching a hockey team.

He hammered that dedication home again, by two years after retiring from coaching his beloved Fishermen, taking the job of coaching the Lord Selkirk/Seven Oaks AA Midget Rebels. His grandson Tyson Parker, 16, plays on the team and was at least part of the inspiration for Hares to take a spot behind the bench again.

“I’m enjoying what I do,” Hares said, and hinted that he’s not looking to quit any time soon.

“If I have good helpers, I could last forever…and I could probably do what I’ve said, you know, if I’m gonna go, it’ll be on the bench.”

Like any success story, Hares’ is built on the foundation of learning. He never stops learning and says to this day he takes the time to learn all he can.

“I’m learning with the times. I spend two to the three hours a day on the computer going through all these different hockey schools, and programming and practices to find out from somebody else, that you can get nowadays,” he said.

“And I’m still doing that. People say ‘what do you do that for?’ Well you gotta stay on top of things, you gotta learn all the new stuff…If you don’t learn something everyday, you’re not paying attention. That’s what I tell the kids.”

It’s probably why his players still relate to him. Hares recognizes that practices – though they may have the same end goal they had 50 years ago – have to be interesting and exciting, for both the players and the coach.

Hares is still showing up to the rink hours early, and still excited by the fact his current team is just one point out of first place. His wife Karen is also still loving life at the rink, almost as much as her husband.

And the hockey world can rest assured that Al Hares will likely still coach for a few more years.

“I’d like to coach younger kids again. I haven’t done that for a long time,” he said.

And of course, he’s got another grandson, Bryce Parker, who’s just 12.

City of Selkirk 15 hours ago