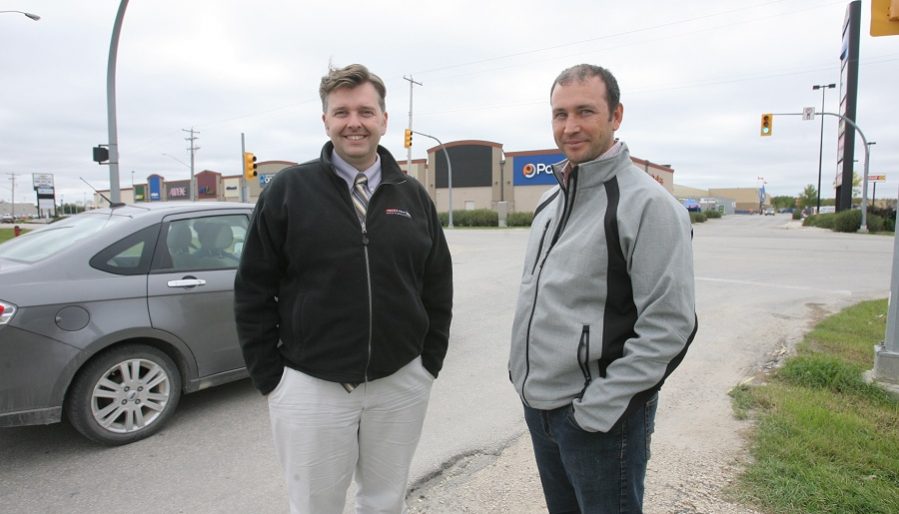 Photo: CAO Duane Nicol, left, and Director of Operations Dan McDermid, at the Manitoba Avenue intersection into Selkirk Crossing and Canadian Tire. Right turns on red are no longer allowed when leaving the shopping areas or the Canalta Inn.

As part of the city’s ongoing efforts to make Manitoba Avenue safer, right turns on red when leaving Selkirk Crossing, Canadian Tire or the Canalta Inn are no longer permitted.

‘No right turn on red’ signs are posted at both intersections and new signs, as well as street paint, on Manitoba Avenue also make it clearer to drivers travelling east and west that there are in fact two lanes of traffic in each direction along that stretch of Manitoba. Signs are also posted to indicate the reduction to two lanes as traffic moves east towards downtown and west towards Hwy. 9.

Selkirk CAO Duane Nicol said though there has always been two lanes of traffic each way in the busy commercial zone, it was unclear to some drivers and often times east or west-bound traffic became backed up because motorists weren’t sure whether they could go around a vehicle turning left into one of the shopping areas.

“It was unclear to people, you would see line-ups there and people not knowing that they could use the right-hand lane to go around,” Nicol said.

Adding the signs and paint to more clearly identify the two-lanes of traffic east and west-bound on Manitoba made it a necessity to institute the ‘no right turn on red’ for motorists leaving the two shopping areas and the hotel.

Dan McDermid, the city’s director of operations, said with east and west-bound vehicles potentially travelling through the intersections at 50 km/hour, steps had to be taken to ensure motorists’ safety.

“The safety aspect was the rational behind the ‘no right turn on red’ rule,” McDermid said.

“We don’t want them turning right on red because of the potential for collisions.”

Nicol said the city created the Manitoba Avenue Task Force to identify opportunities to improve safety on the busy thoroughfare and to improve traffic flow.

The city’s strategic plan lists safe and sustainable infrastructure as a priority and the improvements through the ‘no right turn on red’ rule and better signage fulfill that priority through the smooth operation of transportation systems.