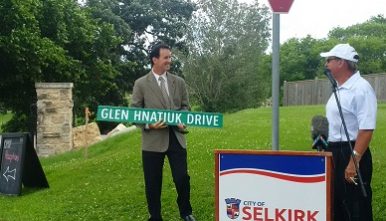 He made a name for himself on the Nationwide and PGA tours in the 1990s and early 2000s, now the City of Selkirk is honouring its most famous golfing son with a street named in his honour.

Mapleton Street will be renamed Glen Hnatiuk Drive and Hnatiuk himself will be in Selkirk for the official unveiling on July 29th at 2 p.m.

Hnatiuk, who was born and raised in Selkirk, attended the University of Southern Mississippi and turned professional in 1990. He played on the Nationwide Tour for several years and in 1998 graduated to the PGA Tour. He won four times on the Nationwide Tour and on the PGA Tour in 2000 had two Top 10 finishes and five, Top 25. His total earnings on the two tours are $2.6 million. Hnatiuk won the Manitoba Amateur in 1986 and was named Manitoba Golfer of the Year in 1987. He was inducted into the Manitoba Golf Hall of Fame in 2012.

Selkirk Mayor Larry Johannson said he’s thrilled the city is recognizing one of its most successful athletes with the street renaming.

“Glen’s been a fantastic ambassador for the City of Selkirk and I couldn’t be happier to see a street named after him, and right beside the golf course where he played growing up,” Johannson said. “He’s an accomplished athlete and he’s always represented Selkirk with class and style.”

The name change also fits in with the city’s strategic planning as it engages the community by creating a sense of pride and appreciation for the citizens that shape the Selkirk.

Selkirk resident Bill Bodman applied to the city to have the name changed. The application was received by the Selkirk Municipal Heritage Advisory Committee and forwarded to the city for final approval.

Mapleton Street is a short stretch of roadway between Reid and Sutherland Avenues, located adjacent to the Selkirk Golf and Country Club. There are no homes located on the street, so no address changes will be required.

The name change is also a celebration of Hnatiuk’s 50th birthday, which he celebrated on May 15, 2015. Hnatiuk is currently a teacher in Florida.

Got graffiti? Who ya gonna call? Selkirk’s Anti-Graffiti team will do the job, free and fast
July 23, 2021